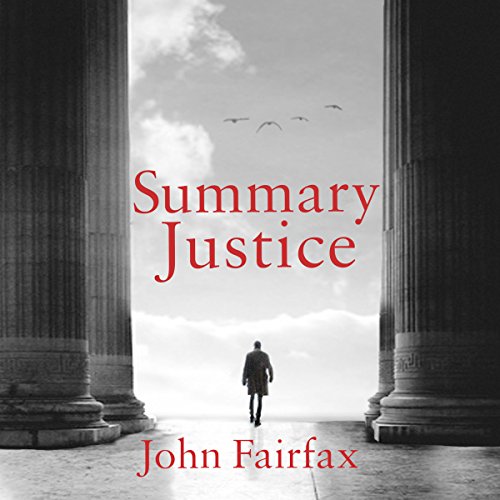 By: John Fairfax
Narrated by: Daniel Weyman
Try for $0.00

The last time Tess de Vere saw William Benson, she was a law student on work experience. He was a 21-year-old, led from the dock of the Old Bailey to begin a life sentence for murder. He'd said he was innocent. She'd believed him.

Sixteen years later Tess overhears a couple of hacks mocking a newcomer to the London Bar, a no-hoper with a murder conviction, running his own show from an old fishmonger's in Spitalfields. That night she walks back into Benson's life. The price of his rehabilitation - and access to the bar - is an admission of guilt to the killing of Paul Harbeton, whose family have vowed revenge. He's an outcast. The government wants to shut him down, and no solicitor will instruct him. But he's subsidised by a mystery benefactor, and a desperate woman has turned to him for help: Sarah Collingstone, mother of a child with special needs, accused of slaying her wealthy lover. It's a hopeless case, and the murder trial, Benson's first, starts in four days. The evidence is overwhelming, but, like Benson long ago, she swears she's innocent.

Tess joins the defence team, determined to help Benson survive. But as Benson follows the twists and turns in the courtroom, Tess embarks upon a secret investigation of her own, determined to uncover the truth behind the death of Paul Harbeton on a lonely night in Soho. True to life, fast-paced and absolutely compelling, Summary Justice introduces a new series of courtroom dramas featuring two maverick lawyers driven to fight injustice at any cost.

What listeners say about Summary Justice

LIke other reviewers, I couldn't put this down. It's clear, fast paced and sounds good.

This is my first 5 star review and I've been listening to audible books for 7 years! This story was clever interesting emotional. Characters and plot well drawn. Better than any court room drama I've read. Especially good as it has been written by a barrister so you feel it is based upon genuine procedure. Narration complimented the story well. I have genuine remorse that the next book hasn't been written yet!

Thoroughly enjoyable listen. This is a mix of William Benson's own tale alongside that of the accused he is so admirably defending. With our hero an ex convict himself it's certainly something a little bit different and tantalisingly leaves some questions unanswered. I found this impossible to put down and only didn't give it 5 stars on every front because I felt the end rambled a little in comparison to the tightly written bulk of the book. I would certainly recommend downloading - and I for one am looking forward to that 2nd instalment that's waiting to be released.

I think Audible have a real gem here and they really need to give it some air. This book introduces a quite unique protagonist. William Benson is a convicted murderer who has fought his way to the heights of the legal profession. What unfolds includes what is in part a traditional British courtroom drama with what to me were very fresh twists on staple evidential plot lines such as DNA and eye-witness sightings.

The legal process was clearly well understood, although I thought the author had got one point wrong . . . until I looked it up! Since then I have discovered that John Fairfax is a new pen name for the award-winning William Brodrick who of course worked as a QC himself which explains his depth of understanding.

The reason I really liked this book though is that it never feels dry and dusty like some courtroom dramas can. Fairfax weaves a clever plot with a number of ingenious twists populated by characters of interest and depth. The intrigue surrounding Benson himself is considerable and clearly set to continue as the series develops. There is warmth, very occasional humour and the author displays an instinctive empathy with his characters.

Daniel Weyman is a narrator that I am familiar with through the Roy Grace series and C J Sansom's excellent "Dominion". He is always good but this is just a notch above his other performances with excellent voicing of each of the characters.

In summary even though it does not seem to be getting a lot of publicity at the time of writing this feels like a series with real potential. An almost made for TV feel pervades some of it. I'm definitely aboard for the ride and to see if Fairfax can develop it further.

Enjoyed this very much.Its such a change to find someone who has the little details right...like "burn" and it's central part on prisoner s lives.Iam a probation officer working in Court.Of course Barristers are not in the least like this rather marvellous protagonist ...if only..but a good light read and sans gore.I read this authors other book The Seventh Lamentation..totally different but so moving and humane.Recomend both books...and I never write reviews usually.

Very engaging story and superb narration. More than one mystery to solve and a protagonist you want to hear more of.

Hope this is first of a series!

Really pleased to have found this author and only did so because Daniel Weyman is one of my favourite narrators. It's a well-plotted story with very convincing court scenes and an intriguing main character. Some questions about him still to be answered, so hoping that there'll be a follow-up!

Recommend this book to anyone who likes legal dramas and complex characters. As always, extremely well interpreted by Daniel Weyman, who has a real gift for bringing stories to life.

The birth of a super-character

If you are looking for a book that will make you crave for the ironing pile to grow or the train to be delayed, just so you can squeeze out some more listening time, this could very well be the one. This is a tense, fast paced and 100% unpredictable drama based in the theatre we call the criminal court. This is not a simple tale of good and bad guys. In fact we are never really sure if the main hero is or is not guilty of the crime he was convicted of. The fact he leaves jail as a lifer and becomes a criminal defence lawyer sounds preposterous but John Fairfax (an ex-barrister) is more than qualified to convince us that this situation is indeed possible, and even if Benson was guilty he still has the right to pursue the career he has chosen. The tension between the main characters is gripping and there is enough depth to suggest this could make a very long running series of books. I won't go into the detail - just like eating chocolate you should experience this for yourself and hopefully be generous enough to share the pleasure with others.

An intriguing and gripping court-room drama

I have a penchant for court-room dramas and this one kept me gripped such that I devoured most of it in one day. I don’t recall ever coming across a novel that has an ex-con becoming a barrister. First we get the background to William Benson’s life and how he ended up in prison and then through hard graft became a barrister. It’s after this introduction, to what I hope will be a series, that the court-room drama really takes off and the tense to and fro of prosecution and defence takes off. The listener is kept on tenter-hooks for hours as the balance between possible guilt or innocence is played out.

I really enjoyed this book and, on the strength of top reviewer Simon’s recommendation, have down-loaded the follow-up novel Blind Defence, that has just been published.

The narrator adds to the pleasure of the book by his admirable ability to give the characters different voices.

Unpudownable - or rather un-stop-listen-to-able - brilliant story with excellent new characters - can't wait for the next one! I couldn't stop listening - a brilliant reader and if you like courtroom dramas this is top stuff. A slight criticism of some passages in the story - I won't tell you anything - but really, this is a thriller and you have to except some rather unbelievable passages. This does nothing to detract from the interaction between the characters or one's desperate desire for the next part of the story!

I had to listen to the first 2 chapters twice. I was drifting off. But a good story. Parts were disappointing. Nicely written.