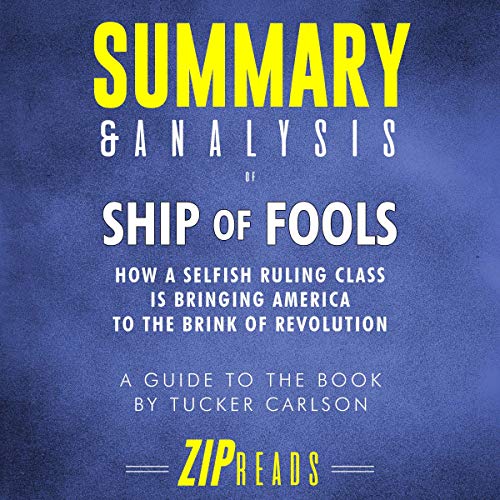 Summary & Analysis of Ship of Fools

How a Selfish Ruling Classis Bringing America to the Brink of Revolution | a Guide to the Book by Tucker Carlson
By: ZIP Reads
Narrated by: Michael London Anglado
Length: 38 mins
Categories: Nonfiction, Politics
4 out of 5 stars 4.0 (1 rating)

Summary & Analysis of Ship of Fools

Let's face it: The ruling class in America has lost touch with the people it's supposed to be ruling. We are on a sinking ship being navigated by people who have forgotten how to sail.

What does this ZIP Reads Summary Include?

About the Original Book:
Tucker Carlson’s Ship of Fools is a collection of essays presented as a call to change the elite power structure that has grown beyond its usefulness in America. As conservative as Carlson is, he laments the loss of classic liberal values such as worker’s rights and international peacekeeping. The liberal position, he argues, was critical for maintaining the checks and balances necessary to keep a functioning, middle-class society. Carlson argues that we, as America, need to take back our democracy and demand accountability from the "fools" in charge.

Disclaimer: This book is intended as a companion to, not a replacement for, Ship of Fools. ZIP Reads is wholly responsible for this content and is not associated with the original author in any way.