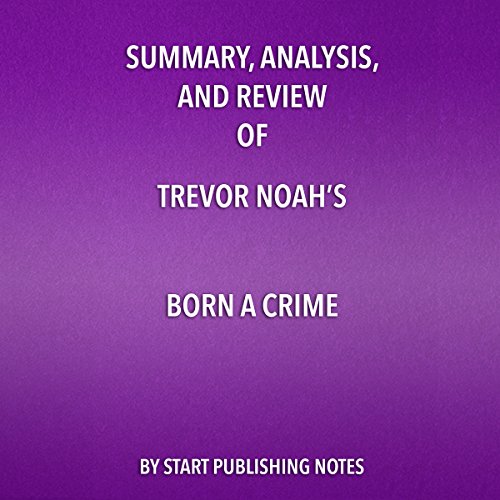 Summary, Analysis, and Review of Trevor Noah's Born a Crime: Stories from a South African Childhood

Please note: This is a key takeaway and analysis of the audiobook and not the original book.

Start Publishing Notes' Summary, Analysis, and Review of Trevor Noah's Born a Crime: Stories from a South African Childhood includes a summary of the audiobook, review, analysis & key takeaways, and detailed "About the Author" section.

Preview: Born a Crime: Stories from a South African Childhood is television star Trevor Noah's memoir about growing up as a mixed-race child - first under apartheid, and then in its wake. Part tribute to his mother, part indictment of his White oppressors, this coming-of-age story paints a vibrant picture of Johannesburg in the 1980s and '90s, and beyond.

Born to a Black mother and a White father in 1984, Noah and his family navigated many unusual challenges, on top of the usual hardships faced by Black families in that time and place. Noah's parents, an African woman and a Swiss man, had an unusual relationship. They never married, and Noah isn't sure to what degree they were even romantically involved. (They were, at the very least, good friends). His mother was keen to have a child, and his father was to be a glorified sperm donor. But after Noah was born, his father decided that he wanted to be meaningfully involved in his life.

What listeners say about Summary, Analysis, and Review of Trevor Noah's Born a Crime: Stories from a South African Childhood

I loved everything about this book. We lived in down town Capetown for several years and observed everything stated in this book . Great story and great story telling. from the beginning to End never get bored.Thank you

What a gripping, amazing story about life in South Africa. Opened my eyes to so many things. I really enjoyed it . Narration was really a plus point for this Audio.

Loved hearing about his upbringing in a different culture and different world. Enjoyed most of the book and narration. The stories are fascinating. Descriptions of life as a colored person in both Apartheid and post-Apartheid South Africa are illuminating. And enriching.
But ultimately its satisfying listen.

This is exceptional Summary. If you have the patience, listen to it as an audiobook. Otherwise, consider reading it. He's a smart guy, a good writer, and an astute observer of humanity, government, politics, and relationships. Insightful, witty, and entertaining, I recommend it. try try

Naughty boys are naughty boys all over the world. I may go back and try to listen again as I would like to know how he became the person he is today. I think if all the best parts were pulled and put into a movie it would flow much better. Yes, I would go see it.

I am glad Trevor Noah has achieved success. His early years and the influence his mother had on him. She must have been quite an interesting and strong character. Summary is short and perfect..

I believe that the history of the country was great,I may go back and try to listen again as I would like to know how he became the person he is today. Trevor started out with great descriptions of where he grew up then it just turned into a what he did story about himself. His observations on race in South Africa and the world over are insightful.

Entertainment I was expecting

After having listen to it, I have a little more insight into a period of time and a culture for which I previously didn't but I'm simply left with an unresolved feeling of what to take from it. I recommend it...

This is what Narration should be. Enter a world of Identity, that happened in South Africa . The characters are True, the world is so completely immersive, and the details are abound.,, Good read those.

Great life story and got the back story on how he became successful, working his way up, habits that he did to reach the top. I kept exiting for big reveal or something significant. I had heard many positive reviews of this book . The audio was good I'm well satisfied overall .