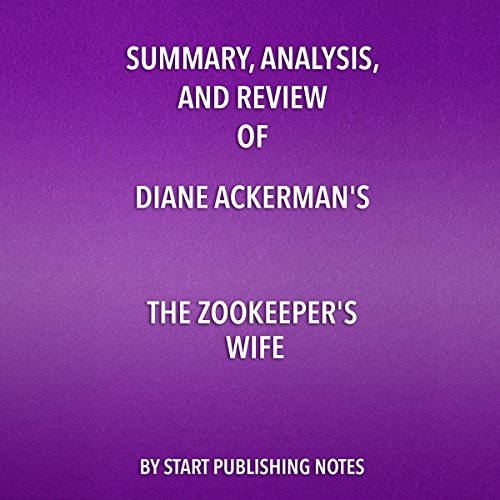 Summary, Analysis, and Review of Diane Ackerman's The Zookeeper's Wife

Summary, Analysis, and Review of Diane Ackerman's The Zookeeper's Wife

Please Note: This is a key takeaways and analysis of the book and not the original book.

Diane Ackerman's The Zookeeper's Wife is the story of Antonina Zabinski, the wife of Jan, director of Warsaw's zoo in the 1930s. When the Nazis invaded Poland in 1939, the zoo fell into disrepair, but Jan joined the Polish resistance, and he and Antonina saved 300 Jews by hiding them in their home and helping them escape Poland. The book makes extensive use of Antonina's unpublished diaries.

Antonina's parents had worked in Russia and had been executed during the 1917 Russian Revolution when their daughter was nine. Antonina was raised by her grandmother; she studied piano and then moved to Warsaw. She met Jan, who was 11 years older than her, while working as an archivist in Warsaw's School of Agriculture. Jan became Warsaw zoo director in 1929, and the two married in 1931.

Save your money, go to Wikipedia instead

This is a little hard to review, admittedly. I downloaded it purely to get a feel for how informative these summary/analysis/reviews might be. I had already read the book, so this was an experiment for me, not a substitute for the primary text.

For review purposes, it was fair and insightful, pointing out the possible disparity between the writer's intention vs. the reader's expectations. The review also talks about the strengths and weaknesses of the film.adaptation.

The analysis was also insightful, giving the reader an idea of the major themes explored in the book. Spoiler: for those who have not read The Zookeeper's Wife, the story is as much about the zoo as it is the ways the Zabinskis defied Nazi occupation, each in their separate ways. The movie focuses more on the Zabinski's courageous acts of defiance against the Nazis.

What's lacking is the summary. The summary gives you a very quick and superficial idea of what happens in the book. There's enough to.peak your curiosity, but anyone listening to this as a substitute for the book, may find the lack of information about the events of each chapter disheartening.

Overall, save yourself the nearly $3 price tag and go to Wikipedia instead.