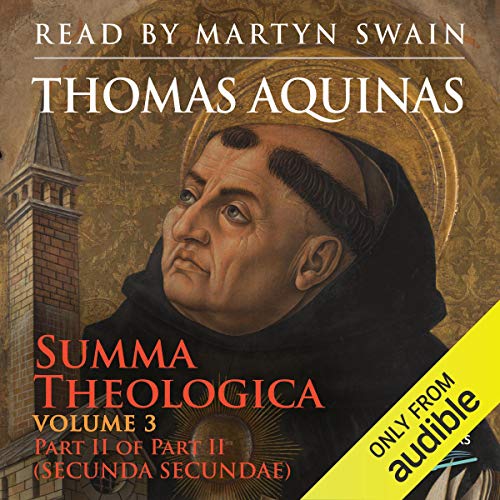 By: Thomas Aquinas
Narrated by: Martyn Swain
Free with a 30-day trial

Secunda Secundae is the longest part in this immense undertaking by Thomas Aquinas (1225-1274). His purpose was nothing less than to survey the theological teachings of the Catholic Church, while absorbing, controversially for his time, many other strands of learning and philosophy, varying from ancient Greek (particularly Aristotle) to Muslim writers (Averroes and Avicenna) and the Sephardic Jewish philosopher Moses Maimonides.

Part II of the Summa Theologica is broadly concerned with ethics, and in this Part II of Part II, Aquinas turns his enquiry towards virtues. It opens with the enquiry into faith, considering the acts of faith, the cause, the effects, hope and their contraries: heresy, apostasy, blasphemy, despair and more.

The four cardinal virtues are then examined, prudence and justice being followed by fortitude and temperance, often with the positive and negative states being juxtaposed: humility and pride; sobriety and drunkenness; fasting and gluttony. Prophecy, rapture, and ‘The Division of Life into the Active and the Contemplative’, are among the topics in Gratuitous Graces, ending with the consideration of man’s various duties and states in general and the state of perfection in general.

As always, Aquinas supports his argument with a wealth of references - notably from St Augustine, of course, but also from a rich and varied list of sources. Throughout this long but sustained work, Aquinas demands continuous attention through his clarity of intellect and expression.

A continuing tribute must be made to Father Laurence Shapcote of the Dominican Order who, while based in South Africa in the first half of the 20th century, made this translation from Latin his life’s work. Martyn Swain continues his impressive reading of this major Western medieval classic of theology and philosophy.