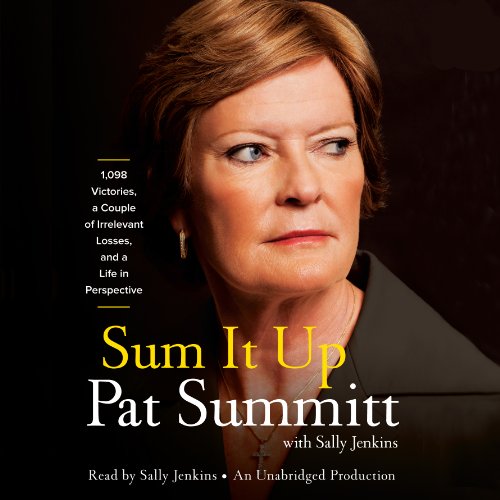 Pat Summitt, the all-time winningest coach in NCAA basketball history and best-selling author of Reach for the Summitt and Raise the Roof, tells for the first time her remarkable story of victory and resilience as well as facing down her greatest challenge: early-onset Alzheimer's disease.

Pat Summitt was only 21 when she became head coach of the Tennessee Vols women's basketball team. For 38 years, she has broken records, winning more games than any NCAA team in basketball history. She has coached an undefeated season, co-captained the first women's Olympic team, was inducted into the Basketball Hall of Fame, and has been named Sports Illustrated "Sportswoman of the Year".

She owes her coaching success to her personal struggles and triumphs. She learned to be tough from her strict, demanding father. Motherhood taught her to balance that rigidity with communication and kindness. She is a role model for the many women she's coached; 74 of her players have become coaches.

Pat's life took a shocking turn in 2011, when she was diagnosed with early-onset Alzheimer's disease, an irreversible brain condition that affects 5 million Americans. Despite her devastating diagnosis, she led the Vols to win their 16th SEC championship in March 2012. Pat continues to be a fighter, facing this new challenge the way she's faced every other - with hard work, perseverance, and a sense of humor.

"I have admired Pat Summitt for many years. To me, she epitomizes what it means to be a coach. Not only has she molded championship teams, but she has helped her players grow as people and always done it with class and dignity. This book gives us tremendous lessons for winning on and off the court." (Tony Dungy, former professional American football player and NFL coach, and number-one New York Times best-selling author of Quiet Strength and Uncommon)

"Pat was a pioneer. She has led women’s basketball over the last three decades. As a result of her leadership, women’s basketball has achieved great heights. I consider a true honor to call her a friend.” (Mike Krzyzewski, head basketball coach, Duke University)

"Basketball legend Pat Summitt recalls her life in vivid detail, describing its triumphs, both on and off the court.... With her trademark honesty and grace, Summitt reveals her fears, her early anger and astonishment, her diminishing abilities, her decision to retire, and how her faith sustains her. "(USA Today)

What listeners say about Sum It Up

This is an easy recommendation to anyone that wants to be inspired. Pat Head Summitt rose from essentially nothing to be one of, if not THE, best at her chosen profession. She has shaped thousands of people both directly and indirectly and this book offers a great level of insight into what made her who she is.

There are too many to mention. The construction of the book, forgoing stats and records in favor of anecdotes and descriptions of the people that were behind the wins and losses, lends itself to the audiobook format. The interspersed recollections of the people around Summitt add perspective and help ground the stories and create a flowing narrative that leads you through an amazing life and career.

This book was constructed by Jenkins, based upon conversations and interviews with Summitt. Having Jenkins read to you is almost like sitting in on those conversations. Because of her closeness to Summitt she is able to add a level of empathy and compassion that might not come through in the straight written word.

Summitt's love for her players and her son, for her entire University of Tennessee family, flows through the narrative and is inescapable. Descriptions of motivational speeches to players and the passion with which she communicates her beliefs had me ready to run through a wall for her.

The story of Pat Summitt transcends basketball or the university to which she gave so much of her life. It is a story of conviction and dedication to excellence. This is an excellent look into the life and times of a complex, fallible, fascinating individual and those that she influenced. This memoir deserves a listen.

Can't say enough good about this. I am listening to it over and over. Perfection on all levels. Very inspiring.

Great story from a great lady!

If you could sum up Sum It Up in three words, what would they be?

When Pat told her team she had been diagnosed with Alzheimer's

If I give up and go to the rocking chair, I'll be rocking fast because I won't have a job.

I've always admired Coach Summitt and I have even more respect for her after listening to her memoir. I was disappointed when I found out she would not be reading it but after listening for just a little while realized that Sally Jenkins found Coach Pat's voice. Classy woman--great story! I love her attitude!

What did you love best about Sum It Up?

I liked the history of how her career came about and I liked the behind the scene stories of the players and coaches. And, of course how her disease is progressing and how she is handling it.

I really enjoy her discussions about the role her son plays in her life. I also like the Connecticut's Gino A. discussion.

The way she remembers her players.

Great book for fans of Pat

Would you consider the audio edition of Sum It Up to be better than the print version?

Perhaps. I liked the narration, but I didn't read the book

Pat's personal history and how it impacted her coaching style

Didn't have a favorite - so much information and history to absorb!

Fans of Pat And women's college basketball will enjoy this book. Great personal history and history of the game.

If you could sum up Sum It Up in three words, what would they be?

I enjoyed listening to Pat's life story. The only part I didn't like is how Alzheimer's is now part of Pat's life. To get it at early onset as well is just the pits. Kudos to Pat for the many lives she has impacted and helped shape.

On a positive side, finally having a baby after so many miscarriages was terrific. Of course, all the wins and awards she and her teams achieved was wonderful.

There was a lot of emotion listening to the book instead of just reading it which really made the book come alive.

The making of a champion.

Highly recommend this book and not just to the sports enthusiast. It's a story of hard work and the rewards that follow or sometimes the rewards are not a trophy but instead growth and development that's takes you to the next level. Best wishes to Pat and her family.

What made the experience of listening to Sum It Up the most enjoyable?

Sally Jenkins brings all of Pat's experiences, humor and heartache to life. I would find myself laughing in the grocery store or crying in the car on the way home.

It is hard to pick just one, Pat Summitt is such an amazing woman on all fronts.

The feel of Pat reading the book to you personally.

All the above and I can't shut up about it.

I have taken away so many lessons from this amazing woman, as I continue to develop myself as a coach and a human being, her leadership inspires me everyday to be more.

What made the experience of listening to Sum It Up the most enjoyable?

This is a great listen.

Just about one of the most admired women in US.

I picked this book due to its good reviews, and it turned out to be one of my FAVORITE audio books. The story is intriguing on many levels: the thrill of sports, lessons of great leadership and team building, and the touching side of family relationships and Alzheimer's. I truly recommend this book to anyone for the story alone, but I highly recommend it to athletes of ANY age, coaches, and leaders. If you need an inspirational book to recharge your get-up-and-go, listen to this book. Great story, excellent writing, and very well performed. You really feel like Pat Summit is talking to you. Amazing lady, great book.

I had no idea who Pat Summitt was before listening to this book. I came away with and immense respect for her as I was lead through her life by the narrator. The narrator is excellent and the author. She reads the story with just enough southern twang to transport you to Tennessee in an instant. One of the best narrated books I have listened to!

Captivating, a must read for any Basketball fan

fascinating insight into elite sport. an amazing coach, leader, mother with a personal ambition to be the best and to champion the best around her. loved it!