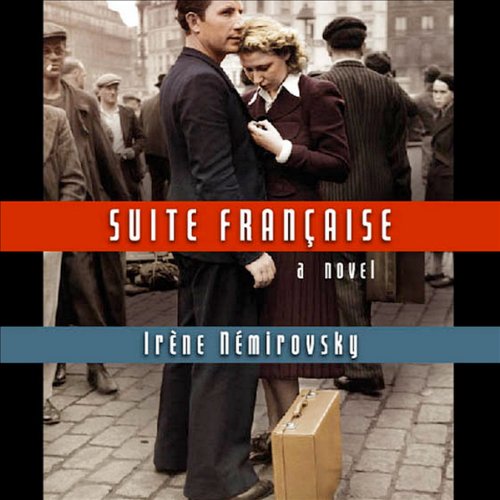 By: Irene Nemirovsky
Narrated by: Daniel Oreskes,Barbara Rosenblat
Try for $0.00

Irene Nemirovsky was arrested soon after completing the second part of Suite Francaise. Ten days later, on August 17, 1942, she died of typhus in Auschwitz-Birkenau. Her husband, Michel, perished in a gas chamber on November 6. Their daughters, Denise and Elizabeth, survived, hidden in safe houses and convents, carrying a suitcase packed with clothes, photographs, and their mother's manuscript written in tiny letters to save paper. For years, both girls thought it was a journal and couldn't bear to read it. Then, in the late 1980s, Denise began transcribing it with the help of a magnifying glass.

Part One, "A Storm in June", is set in the chaos and mayhem of the massive 1940 exodus from Paris on the eve of the Nazi invasion. Part Two, "Dolce", opens in the provincial town of Bussy during the first influx of German soldiers. Each part features a rich cast of characters, people who never should have met, but come to form ambiguous relationships as they are forced to endure circumstances beyond their control.

"A finely made work of fiction that portrays occupied France with both severity and sympathy....Written with extraordinary detachment by a woman who seemed to know that her own days were numbered." (The New York Times)

What listeners say about Suite Francaise

What a wonderful writer -- and what a marvelous translation! I just loved these two connected novellas and have recommended them to all of my book-loving friends. They're beautifully read by narrators who have sense enough to inflect the story but ultimately to disappear. Just a lovely, lovely book, although there is additional material in the print edition that the recording ought to have included.

This is one of the best books I have read in a while. The story of the author is as interesting as the book itself. In 1942, after fleeing Paris to a small town in France, the author, Irene Nemirovsky, was captured and sent to Auschwitz where she died of typhus. She left behind leaving two young daughters and a husband (who was also killed in the concentration camps). For years her daughters carried the unfinished manuscript in a suitcase as they fled the Nazis, too afraid and hurt to look at it. 60 years later, her eldest daughter published this extraordinary account of the early war years in France to wide critical acclaim. Lucid portrayals of human relationships, descriptions of dreamy landscapes turned muddy from bombs, and an incredibly poignant ability to show human nature truthfully make this a must read. Ms. Nemirovsky had the uncanny and scary ability to write with such depth and reflection about the events that were unfolding around her. Truly one of the best modern writers.

This moving and powerful book, authored by a published writer in France who perished at Auschwitz, presents two parts of a planned multi-part suite which were recently discovered by the author's surviving daughters. The first, "Storm in June," relates the tale of disparate denizens of Paris fleeing to the countryside steps before the Germans. The second, "Dolce," depicts the German occupation of a French village and the strained relations between the soldiers and their reluctant hosts (some of whom were introduced in the first part). This novel is beautifully wrought, with profound insights into human nature -- greed, corruption, grief, fear -- and told with a sly wit and humor. Expertly read with just the right dramatic punch. As an added bonus (for those of us who are bereft of foreign language skills), was the opportunity to listen to a correct pronounciation of the various French names and locations.

Feel the terror of occupation

In two novellas, Storm in June & Dolce, Nemirovsky skillfully brings the reader into the world of civilians under German occupation in France in 1940 & 1941. The first work follows several individuals as they flee Paris in the ahead of the German advance. This work captures the confusion, panic, divided loyalties, prejudices showing through patriotism, the impact of stress. In short sketches, Nemirovsky provides the reader with a sense of the motivations driving the many characters, how they react to a completely novel and often terrifying situation. In Dolce, Nemirovsky focuses her gaze on a small town under German occupation several months later, with a new & smaller set of characters. This work provides a sympathetic appreciation of how difficult it is to naturally maintain patriotic fervor in the rhythm of everyday life, while at the same time showing that individuals can rise above this everyday situation to demonstrate heroism against the occupying forces. Although this work was penned nearly 70 years ago, they speak powerfully today.

I have read many books about war-time France, but never one like this one. To hear the story from one who lived it is an experience - which is what the book is. It is not war-time plots, spying or battle it is war-time living and the relationships that the people envolved develope with their own and with the enemy.

One of the most moving, brilliantly observed and beautifully written books about war, fear and the irrepressible human impulses that emerge under these conditions that I have ever read. Nemirovsky had remarkable insight, understanding and sympathy for people as well as a capacity for observing the beauty of the everyday and ordinary. We are so fortunate that her books did not perish.

I listened to this beautiful produced and performed audio book. Truthfully, I'd started it some years ago and stopped listening. It just wasn't grabbing me. But starting it again now has been perfect timing. Having read a few World War II novels lately, this offered another story, style, and perspective.

The author wrote this during the period it's set in. Yet, the story isn't about her. It's about the exodus from Paris in 1940, with its effects on Parisians and the French in the surrounding countryside. We meet a variety of people and often their families, not quite knowing how they'll all fit together. And actually, they aren't all interconnected but that doesn't distract from the story.

In addition to the depth each vignette is developed (as a rough draft!), I keep re-thinking the author's experience. She wrote everything in tiny script to save precious paper. She gave her manuscript to her daughters, sent them to safety, and went to Auchwitz only to die soon after. None of the characters' stories are as dramatic as the author's.

I enjoyed the reading of Suite Francaise but I think readers may be a bit disappointed to find that the personal correspondence letters of the author before she is taken away to the camps are not present in the audiobook version, though we hear about them in the introduction. I suppose it is because audiobooks don't usually contain appendices and that is where the letters are in the text version.

These are beautifully written stories about the exodus of Paris when the Germans invaded France in 1940, and about village life during the German occupation. Richly detailed, full of irony and with much attention paid to the subtleties of class interactions during those turbulent times, they demonstrate the author's vast talent and the world's great loss when she died at the hands of the Nazis.

Unfortunately one of the readers, Rosenblat, disappoints. The emotions depicted by her vocal tones often conflict with those indicated by the text. Better to read the text in a normal voice than dramatize inaccurately. Allow us, the "readers", to interpret the text for ourselves.

All the reviews for this book were great, and I really wanted to like it. It moved so slowly, and nothing really happened. I guess it was interesting, but I couldn't stay focused for all 12 hours (even though I did listen to the whole thing ... I often found my mind wandering). Maybe this is one to read.