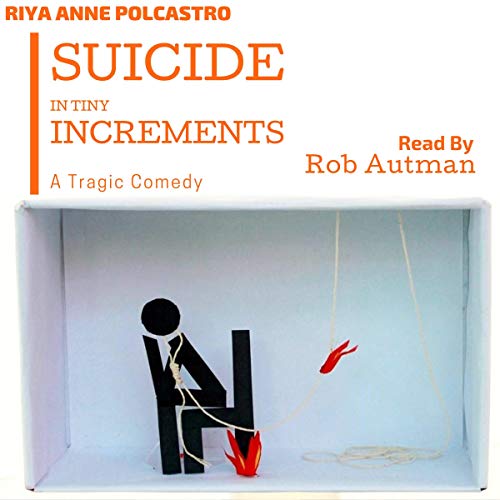 By: Riya Anne Polcastro
Narrated by: Rob Autman
Try for $0.00

The smartest decision Daniel Long ever made was to take a hit out on his own life. Too scared to kill himself but also too scared to live, he is a sad, pathetic man; a miserable martyr of depression.

A year after he was dumped by his self-centered alcoholic girlfriend, he still wallows in the hole she left behind. And, except for the cubicle that he spends 40 hours a week in, Daniel rarely leaves the bare white walls that make up his apartment.

Trapped in his self-made ennui, his only escape is to hire a hitman. But when one of his few friends kills herself Daniel realizes the error of his ways. He tries to cancel the hit but in the process he offends his contracted killer. Now his impending death is personal and his life is about to get more exciting than he ever could have imagined.

What listeners say about Suicide in Tiny Increments: A Tragic Comedy

Characters you loathe to love

Polcastro weaves a tragic yet comical tale that keeps the reader wondering what could happen next. I found myself rooting for the main character every step of the way. Autman's narration injects life into these offbeat characters and their toxic relationships. A must read for anyone who likes to chuckle while reading.

Daniel is depressed. Living the monotony of his day to day life, he yearns for love but doesn’t think he’ll ever find it. Though he lives, he doesn’t really feel alive. Until one day he makes a mistake that can’t be easily undone.

Even though Daniel was kind of an annoying MC in that he didn’t have much in the way of a personality, I think the way the author detailed depression was very well done. A lot of people live in the depressive monotony of their lives, and this book gives insight into what it’s like for people suffering through something similar.

As someone who has struggled with depression all their life, I could relate to Daniel even if I didn’t personally like his character. This book deals with a lot of difficult topics like that, but in a way that’s easier to digest. There are some laughs, here and there, but not many.

The narrator had a monotone drawl which in any other book would’ve been hard to listen to. In the case of this book though, I felt it was perfect because it mirrored Daniel’s depression in a way.

This is a well written and realistic story about an everyday guy that can’t see past his own depression and lack of self worth to the abundance of love in the world. Although I truly liked this story, it definitely has a unique sense of humor and bite. Fair warning that it is full of drug/alcohol use and explicit sex, but more of the voyeurism of your boring neighbors half-hearted attempts rather than anything titillating.

The narrator initially seemed too monotone, but actually he perfectly conveys the tone of the protagonist’s life and flat affect, and I really liked him after the first chapter. For someone that has, or is, gone through depression or lack of self worth this book may be either difficult or refreshingly spot on.

At five hours it’s a quick listen, and touches on difficult issues and emotions that many people have gone through in life. Although I did receive this book for free in exchange for an honest review, I had this in my Audible wish list before the offer and happy to review. Very worth the time if it’s your style!

While humorous this book isn't sure what it wants to be. It discusses a number of mature themes and tries to go into them, only to fall short. It's honestly what I would expect from my 13 year old son. Tries to deal with certain aspects he has no first hand knowledge of and so falls short on details.

Still it's a fun, irreverent book that I enjoyed.