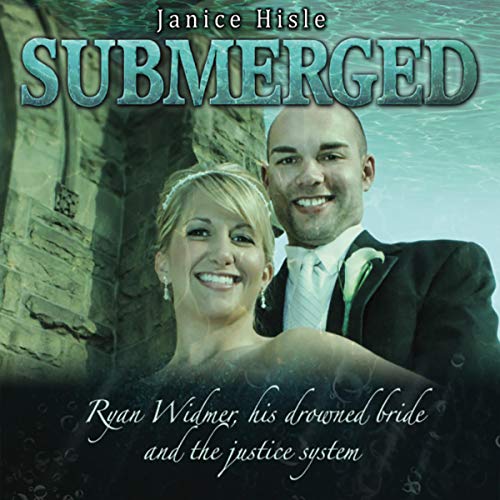 A young bride drowns in her bathtub. Her husband of four months is accused of murder. What happened in their tiny suburban bathroom - and why - was never resolved.

Compelled by conscience and curiosity, former Cincinnati Enquirer reporter Janice (Morse) Hisle - who covered the saga of Ryan and Sarah Widmer from the start - returns 10 years later to dig deep to tell the untold story: dozens of interviews, 6,000 pages of trial transcripts, and previously unrevealed records such as:

Submerged will draw you into the depths of a stranger-than-fiction story that you will ponder long after listening to the final word.

What listeners say about Submerged

I got to Chapter 5 and was so irritated by the narrator saying, quote, unquote every other line I couldn't continue. Her cadence was also slow. Shame too because I love true crime stories and the book looked extremely interesting.

Narrator is TERRIBLE - but good book.

everything good except narrator. She is terrible and should not be allowed to do this ever again. way to overdramatic - and in the wrong areas.

Ruined by the Narration

For me this audiobook was ruined by the narration, which was performed by the author. There is a reason they call narrators THE TALENT. This sounded like a school teacher reading to a class of 3rd graders. I'm stymied by how Audible could have allowed this to happen when you have so many excellent narrators. Hisle merrily bounced her way through a serious, true crime story. Shame.

I wish I could’ve continued on w/this read as it sounds like an interesting case , I , however
couldn’t listen any longer due to the narration 🥴I felt it sounded forced and over the top.

Glad the book was written, at least from what I could gather in the first 6 chapters. It seems like the case at least needs to be moved and retried, but this author or at least the narrator, one or both are just awful. Sounds like something written by a child. I can't believe I spent my money on this.

Thumbs up the story; thumbs down the narration

The narrator was awful. She sounded like the narrator of Desperate Housewives. To be specific, her voice inflections at important times or questionable events would go into a high-pitched whimper-like voice.

The story is very intriguing and I’m wondering if any other author has covered this because I still can’t decide on his guilt or innocence. However it was repetitious in that it restated the same facts over and over again. I guess the whole book could have been shorter than it was. But other than the exasperating narrator, it was a good listen.

unable to finish listening due to constant quote unquote. most annoying . I'm most disappointed

I had not heard of this case ... couldn’t put this book down. Definitely a page turner. Author did a fantastic job. I look forward to more true crime stories from this author.

I was worried that I might not enjoy this book with reviews about narration. It took a bit to get used to the quote unquote, but now understand why that technique was used. Because we are talking about an actual case, it is important to know when the writer is telling us word for word what a person said. I can appreciate that and the use of quotes in its reading. If it bothers you, stick with it the book is worth it!
As a citizen and teacher of forensics in Warren county where this case occurred, I was absolutely intrigued. It was quite interesting to hear the about the details of evidence that were presented in court as well as those that were not. I appreciated that aspect of the book very much. As the title reads, another thread of this book is about our justice system. And from what I have seen in this case, I am quite unsettled. This book will challenge your assumptions about justice and the process of investigation.
Janice is a skilled writer and I hope that she will continue writing investigative books! Might I suggest that Carrie Culberson case?

Heartfelt and Evidence Based

Wow! Heartfelt and Evidence Based is not generally written in the same sentence but it fits for this book. Janice Hisle takes a personal approach to covering the Ryan and Sarah Widmer story. This is a case I saw on the news headlines and thought I knew. I was comfortable with a guilty verdict and believed justice had been done. However, after reading this book and the problems with the evidence, I find myself second guessing that notion. Janice takes a deep look through the forensic evidence, the testimonies, and the handling of the case that leaves me wondering if justice has truly been served. Perhaps, I was too quick to trust the headlines. Don't misunderstand. This book is not a Free Ryan book. HIsle lays out the facts, evidence and science so readers can make up their own minds. She does it in a way that you are drawn into the stories of those involved. You feel their pain and their confusion, their joy, their hope and their despair. Yet, at the same time you see the flaws and lack of science clearly. All in all it is a wonderful blend of humanity and facts in one book. Highly recommend.

Brilliant and beautifully read. I felt like I was on the jury of this strange and intriguing case. I changed my mind minute to minute. I’m still not sure. I’m very glad I’m not on the jury, I would be having sleepless nights whichever way I decided. Well done Janice. I admire your investment in this case. Any more books on the way?