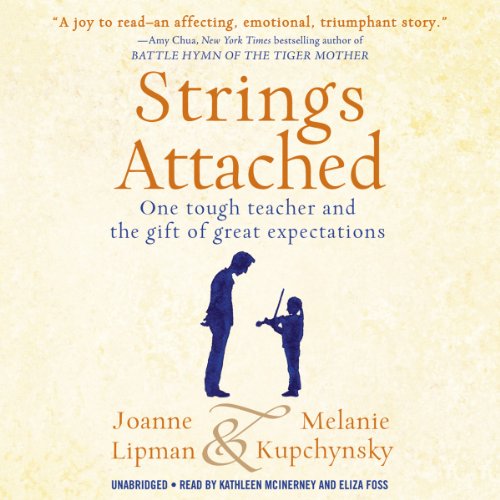 The Fine Art of Tough Love

If you're lucky, somewhere in your past is that one person who changed your life forever. The one who pushed you to dream bigger and to reach higher, and who set you straight on what matters in life. Perhaps it was a coach, or a professor, or a family friend.

For Joanne Lipman and Melanie Kupchynsky, that person was a public-school music teacher, Jerry Kupchynsky, known as Mr. K - a Ukrainian-born taskmaster who yelled and stomped and screamed, and who drove his students harder than anyone had ever driven them before. Through sheer force of will, he made them better than they had any right to be.

Strings Attached tells the inspiring, poignant, and powerful story of this remarkable man, whose life seemed to conspire against him at every turn and yet who was able to transform his own heartache into triumph for his students.

Lyrically recounted by two former students - acclaimed journalist Joanne Lipman and Mr. K's daughter, Chicago Symphony Orchestra violinist Melanie Kupchynsky - Strings Attached takes you on a journey that spans from his days as a forced Nazi laborer and his later home life as a husband to an invalid wife, to his heart-breaking search for his missing daughter, Melanie's sister.

This is an unforgettable tale - a captivating narrative that is as absorbing as fiction - about the power of a great teacher, but also about the legacy that remains long after the last note has faded into silence: lessons in resilience, excellence, and tough love.

Strings Attached is for anyone indebted to a mentor and for those devoted to igniting excellence in others.

What listeners say about Strings Attached