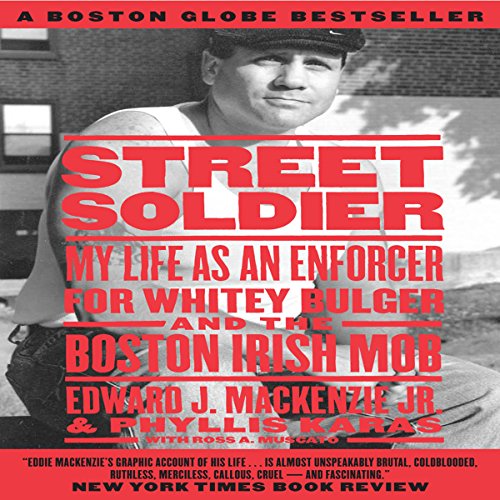 For decades the FBI let James ''Whitey'' Bulger get away with murder, allowing him continued control of his criminal enterprise in exchange for information. He went on the lam in 1995, after the terrorist attacks of 9/11, 2011 followed top-ranked Osama bin Laden on the FBI'''s Ten Most Wanted List, and then was captured in Santa Monica, California weeks after Bin Laden's demise.

Edward J. MacKenzie, Jr. was a drug dealer and enforcer who would do just about anything for Bulger. In this compelling eyewitness account, Eddie Mac delivers the goods on his one-time boss and on such former associates as Stephen ''The Rifleman'' Flemmi and turncoat FBI agent John Connolly.

Street Soldier is also a story of the search for family, for acceptance, for respect, loyalty, and love. Abandoned by his parents at the age of four, Mackenzie became a ward of the state, suffered physical and sexual abuse, and eventually drifted into Bulger's orbit.

The Eddie Mac who emerges in these pages is complex: An enforcer who was also a national kick-boxing champion; a womanizer who fought for custody of his daughters; a kid never given much of a chance who went on, as an adult, to earn a college degree in three years; a man who lived by a strict code of loyalty but also helped set up a sting operation that would net one of the largest hauls of cocaine ever seized.

Street Soldier is as disturbing and fascinating as a crime scene, as heart-stopping as a bar fight, and at times as darkly comic as Quentin Tarantino's Pulp Fiction or Martin Scorsese's Good Fellas.

Actor/Producer/Writer Peter Facinelli (The Twilight Saga Films, Nurse Jackie) announced within days of Bulger's arrest – that he has secured funding and a script for a movie adaptation of Street Soldier, which he optioned nine months earlier.

"Eddie MacKenzie's graphic account of his life as a violent street criminal in South Boston is almost unspeakably brutal, coldblooded, ruthless, merciless, callous, cruel - and fascinating. Reading it is like happening upon a street crime and entering the perpetrator's mind.” (John W. Dean in the New York Times Book Review)
“An almost unbeatable insider's account of the mob.”( Library Journal)
“MacKenzie is the first ‘predator' (his description) from the murderous Irish mob in Boston to come forward without an indictment hanging over his head and attempt to tell the ugly truth about an organized crime group that plagued Boston for much of the past 30 years.” (Jonathan Wells in the Boston Herald)

What listeners say about Street Soldier

Mathias Bossi is the Boss! Wow!

OK, this book is interesting. Another mob has-been cashing-in on his life of crime. Tawdry at times but apparently brutally honest, which I liked.

What I really loved about this audiobook was the narrator! He is simply marvelous! It was like having the gangster himself telling me his story!

The accent, the speed of his delivery, everything was fantastic.

The story is good, kinda crazy, and Bossi's narration makes this book a must-have!

The best part of this audiobook is the narration -- Bossi has an authentic, South Boston voice which is entertaining in its own right and clearly necessary for the subject matter.

The book itself has some enjoyable bits, but overall the narrative moves too quickly, with too many anecdotes and flourishes. It seems as if MacKenzie might be embellishing some of his stories, and even if he isn't, they're often so outlandish that the reader needs more context in order to believe him.

I loved it! story of rise to power and the down fall of an enforcer. you have got to listen to it.

Good read for any Southie-ophile

Really liked this one. I’ve read every single book available re: Southie/Whitey and the daily operation of his crews. I respect this one the most, after Black Mass of course. Kevin Week’s book is a joke, as was Pat Nee’s. This one has the one thing we are all looking for within that Southie psycho drug fueled period of The 80’s and into The 90’s. TRUTH.

I was a teen and college student living not far from them in The 80’s. My only bitch is that, like Weeks, McKenzie brags about his kickboxing ad nauseam. I mean at least it wasn’t Paintball, which “Weeksie” went into. But what these guys don’t realize is, we kind of laugh at that stuff. You’re out killing/dealing/raping and creating SERIOUS mayhem on an hourly basis; but “hey i’m an excellent kickboxer!” The Weeks bragging about paintball has had a group of us laughing for years.

It was cool to hear the story from someone not directly working with Bulger but under him in some fashion.

Having grown up in Boston and being familiar with all the locations and much of the background stories it felt really familiar to me. Will it win a Pulitzer, no I'm sure it won't but how many do.
It was a very deep and personal story of a kid who grew up and lived most of his life in the wrong side of the tracks.
I enjoyed it start to finish.

Great Book about the Southie Mob

it seemed very authentic. was a great journey through the criminal world. plus the fine line between crime and law. good and bad.

Informative if you can get passed the self-justification of violence and predation. You certainly get an understanding of his perspective.

it had it all, well everything we love! mobsters, cia, intrigue and heart.
we listened to it on a road trip and we would go around the block a few times at destinations because we couldnt wait. there is a bit of repeativness but it wasnt too bad.