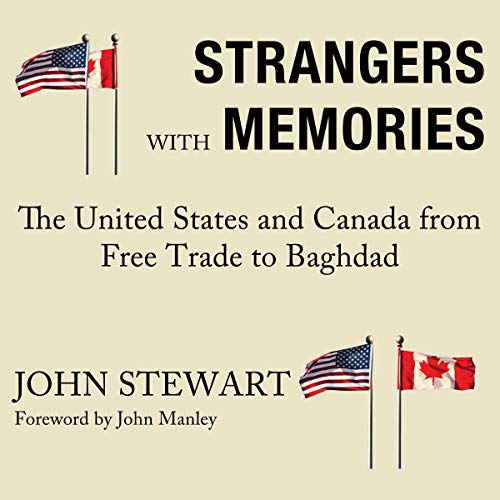 The United States and Canada from Free Trade to Baghdad
By: John Stewart
Narrated by: Aaron Adams
Length: 11 hrs and 16 mins
Categories: Nonfiction, Politics
5 out of 5 stars 5.0 (2 ratings)

In the early 1990s, North America was the vibrant center of an increasingly democratic and revitalized western hemisphere. The United States and Canada were close allies working together to implement a bilateral free trade agreement and build an integrated manufacturing and export economy. By the late 2000s, the economic and diplomatic ties between the two countries were strained as policies stagnated or slipped backward and passports were needed to cross the border for the first time in history. By 2017, the US planned to wall off its border with Mexico and NAFTA was slated for renegotiation.

In Strangers with Memories, John Stewart combines an insider’s knowledge, a mole’s perspective, and a historian’s consciousness to explain how two countries that spent the 20th century building a world order together drifted so quickly apart in the early years of the 21st - and how that world order began its current shift. Assessing the major forces and events in North America’s development between 1990 and 2010, this book also details changes at the US embassy in Ottawa during those years and its relationship with US consulates in Canada and with the state department’s Canada desk. Explaining how Canada's influence in the world depends on the US and has radically diminished with the decline in US diplomacy under presidents George W. Bush and Donald Trump, Stewart gives valuable advice on how Canada should handle its foreign policy in a much less stable world.

This story was extremely informative. John Stewart provides an insider’s perspective to what remains a very convoluted relationship between the United States and Canada. I never got bored or felt that the topic was belabored. On the audio side, I was nervous that this book, in audio-form, would be dry and hard to get through. However, it was quite the opposite. The book was narrated remarkably well. Aaron Adams, brought life to the subject and kept my interest throughout the entire book. I’ll be watching for other works by both this author and this narrator.