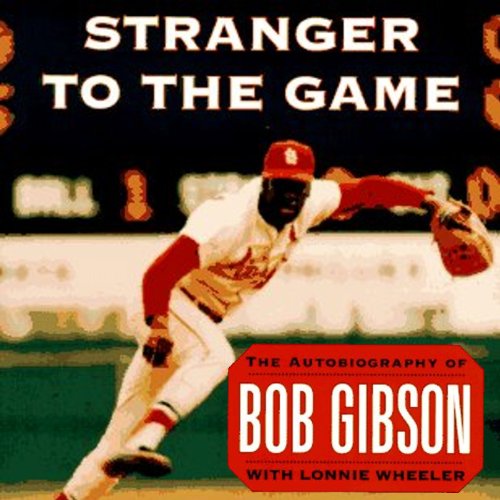 Stranger to the Game

By: Bob Gibson,Lonnie Wheeler
Narrated by: Fred Berman
Try for $0.00

Hall of Fame pitcher Bob Gibson has always been one of baseball's most uncompromising stars. Gibson's no-holds-barred autobiography recounts the story of his life, from barnstorming around the segregated South with Willie Mays' black all-stars to his astonishing later career as a three-time World Series winner and one of the game's all-time greatest players.

What listeners say about Stranger to the Game

What did you love best about Stranger to the Game?

Having read "From Ghetto to Glory" (which needs to be an audiobook as well) was good to hear Gibson's stories from '68 and beyond.

What was one of the most memorable moments of Stranger to the Game?

Would you be willing to try another one of Fred Berman’s performances?

Terrible reading from Fred Berman who clearly knows nothing about baseball and does not miss an opportunity to mispronounce a name.

Despite poor reading is an interesting story from one of baseball's all time greats.

I loved hearing it in Bob Gibson's own voice. I felt like I was there

I grew up knowing the amazing pitcher Bob Gibson was but after this story you find out what an amazing man he was. If you only know Gibson as the amazing player you need to read this story to get the real story behind this baseball great!

I was enraptured with Bob Gibson when watching Ken Burn’s Baseball documentary, where a section was devoted to the Cardinals teams of the 60’s. Bob with his menacing pitching piqued my interest to learn more about the two time World Series Champ and HOF alum. However, one day when I was browsing autographed balls on the Official Hall of Fame website, I saw Bob’s autographed ball discounted by 25%. Autographed merchandise is rarely discounted that much. I purchased his ball and this audiobook.

It is said it is best to hear both sides of the story, and Bob eloquently and candidly explains how he suspects the became a “Stranger to the Game”. This man grew up in the dawn of the civil rights movement, and the prime of his career was sandwiched between the assassinations of JFK and MLK. He was a man who was frequently the target of unbelievable bigotry. Early in his career, he made the decision to aggressively guard the inside of the plate, while simultaneously employing a glowering demeanor on the mound that followed him off of the field. He openly admits that the anger over the racism of the day provided ample fuel for his dominant pitching. At the end of the book, he concludes that his has been estranged from the game for being a black man with an attitude.

The beginning of the book we see him growing up in the hood of Omaha with his older brother, Josh, acting as his father, coach, and mentor, and then the journey to The Show, which included a stint with the Harlem Globetrotters. Yes, Bob feels that basketball was his best natural sport, and he supplemented his income while trying to break in to MLB. The heart of the book covers his career with the St. Louis Cardinals from the early 60’s into the early 70’s. He provides overviews of many of the seasons as well as play by play of many of the important games of his careers. He gathered many quotes from teammates and opponents including Hank Aaron. Other noteworthy players include his battle with Sandy Koufax and Roberto Clemente. All the while, he provided a consistent, non-apologetic defense of his anger fueled play style and insistence on pitching inside. Both, he reasoned, were to gain an edge on the opposition in a win at all costs style of gameplay. He reasoned that if he were a white man, his style would not have been called into question, and his lifetime reputation would not be so severely and irreparably damaged.

The final part of his book details his life after baseball, which is largely bereft of baseball. This superstar of the game with Cy Young’s, Gold Gloves, and MVPs to match, had a very anemic career in baseball. And he blames that in large part to the permanently damaged reputation he garnered as a pro. Hence the title of the book, “Stranger to the game.”

This book was very enjoyable, and like all good autobiographies, I felt like I was sitting at the kitchen table talking to Bob myself. It might be tempting to conclude that Bob ultimately reaped what he sowed when baseball turned its back on him after he finished playing, but you simply cannot do that. He was a black man in a white man’s world at probably the most tumultuous time for race relations in the last 100 years. Though he downplayed it in the book, he basically feared for the life of him and his family. The trauma that inflicted cannot be overstated.

The narrator Fred Berman was absolutely excellent. His inflection was amazing. And he delivered the words with punch, like I know no doubt Bob would have done if he narrated the book himself. The book was written in 1994, and does not account for the most recent 26 years (this review was written in 2020). But that 1994 ending is still the same ending. He still never received any job in baseball. At the time of this writing, he is battling pancreatic cancer.

Interestingly, his book contains very brief mentions of two figures. The first is Donald Trump, who tried to start up a rival baseball league to compete against MLB in the early 90s. And. Bill Cosby. Of all the things that he could say about this man that he socialized with on occasion is that Bill knew how to mix very tasty...and strong...alcoholic drinks, even though Bill never drank alcohol. How eerily prescient.

I recommend this book without any reservation whatsoever. This was a wonderful time in baseball history!