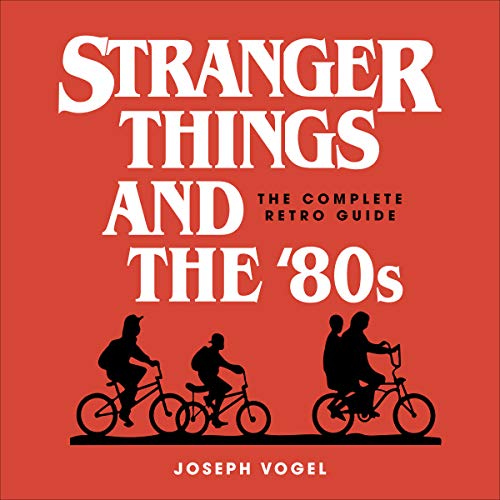 Stranger Things and the '80s

By: Joseph Vogel
Narrated by: Patrick Miller
Try for $0.00

Since its premiere in the summer of 2016, Stranger Things has become a global phenomenon. It also restored in vivid detail the pulse and feel of a decade: the 1980s.

Indeed, the show's creators - the Duffer brothers - describe the series as "a love letter to the '80s". From its synth soundtrack, to its retro fonts, to its nostalgic nods to Spielberg and Stephen King, Stranger Things is populated with references, homages, and artifacts from the Reagan era. This audiobook dives deep into that world, revealing everything you wanted to know about the series and its influences, including:

Other stops on this "curiosity voyage" include: explorations of arcades, Ataris, BMX bikes, MTV, Radio Shack, Carl Sagan, Ronald Reagan, Eggos, Steve's hair, and mom jeans. Packed with detail and insight, Stranger Things and the '80s is the ultimate companion to the hit show and the era that inspired it.

What listeners say about Stranger Things and the '80s

Blend of Nostalgia and Stranger Things

loved it sooo much. great extra details about characters and 80s nods. back story on movie references.

A good dealOf interesting context and backstory, but the performance leaves a lot to be desired.

I appreciated the research that went into writing this book. The author breaks the fourth wall a bit more than worked well for me; I’d prefer to keep the opinions more in Web blogs and less in a book I’m looking to for context and Easter Eggs I’ve missed. That said, there was a good deal of interesting content I hadn’t encountered in other books covering Stranger Things.

Patrick Miller’s performance is simply bad. He mispronounces words and well-known names. He takes odd breaks at what I have to assume are line breaks. It’s extremely distracting throughout the performance.

Summary: if you love Stranger Things, I recommend the book for backstory and context. Go into it expecting a jarring reader, and hopefully you’ll be able to focus on the information and not be too distracted by the uneven delivery.