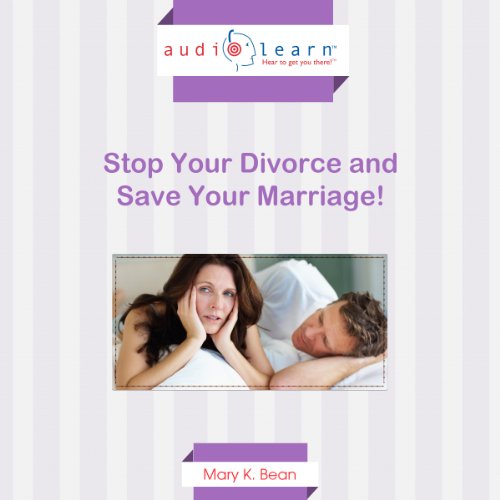 Stop Your Divorce and Save Your Marriage!

Suppose you could have saved your marriages? But you didn't know where to start. If that's you, than this could be the most important audiobook you ever listen to.

You could cut the tension in your home with a knife. You love your spouse, and they love you. You've been married for years, and at one time happily. But now it's just a memory; and you can't believe this is happening to YOU.

How did it happen? Where did your marriage skid off course? More importantly, can your relationship ever be restored to the way it was on your honeymoon?What if you just gave up? Say you went forward with a divorce. Is that really what you want? What if you could save your marriage when you...

If you didn't act to save your marriage, could you ever forgive yourself? You didn't think it'd end up this way on your wedding day. But now you can't get a straight answer. Their sarcasm hurts. And making one simple request feels like you're asking them to do the impossible. Like you want them to throw a rope around Venus and pull it down or something.

Most marriages start to fail when you stop listening to each other. There's a lack of respect between you. And sexual intimacy isn't doing so hot either. Does that sound familiar?

They never want to admit to being wrong. Say one thing and do another (i.e. "I'll change"). You suspect they're not always being honest. And maybe you're guilty of some of these things as well.

What Every Married Couple ?Ought To Know About Divorce

In situations like this, it's no wonder why people think divorce is the only way out. (But I know that when most people think they want a divorce, what they really want is a change.)

What listeners say about Stop Your Divorce and Save Your Marriage!

This book was all statistics and corny quotes. It has nothing to do with saving a marriage.

Awful. A complete wast of time!

This is neither a book nor helpful. It is a series of short preachy lectures. There was no useful content ideas or suggestions. It was an Autre waste of time!

very short with no strategies

paints a picture and some cause and effect of how we get to divorce and the consequences, but doesn't give a lot of strategies.