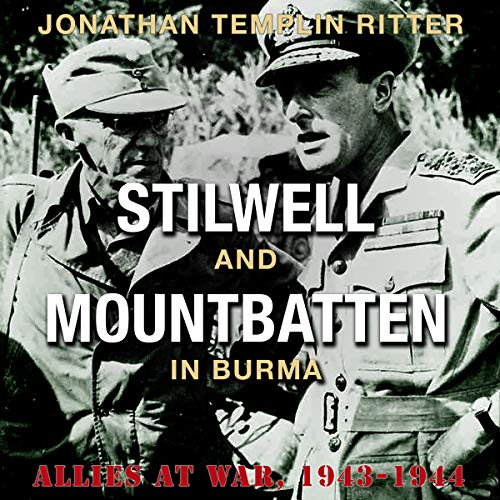 By: Jonathan Templin Ritter
Narrated by: William Dupuy
Try for $0.00

Stilwell and Mountbatten in Burma explores the relationship between American General Joseph “Vinegar Joe” Stilwell and British Admiral Lord Louis Mountbatten in the China-Burma-India Theater (CBI) and the South East Asia Command (SEAC) between October 1943 and October 1944, within the wider context of Anglo-American relations during World War II. Jonathan Templin Ritter discusses the military, political, and diplomatic aspects of Anglo-American cooperation, the personalities involved, and where British and American policies both converged and diverged over Southeast Asia.

Although much has been written about CBI, Stilwell and China, and Mountbatten, no published comparison study has focused on the relationship between the two men during the 12-month period in which their careers overlapped. This book bridges the gap in the literature between Mountbatten’s earlier naval career and his later role as the last Viceroy of British India. It also presents original archival material that explains why Stilwell was so anti-British. Finally, it presents other original archival material that refutes previous books that have accused Stilwell of needlessly sacrificing the lives of his men during the 1944 North Burma Campaign, merely out of hatred for the British.

"A revealing analysis of two major wartime personalities, where much was not always what it seemed to be on the surface." (Journal of America's Military Past)

"An important book for those studying the Burma campaign, this will also prove useful reading for anyone interested in the dynamics of command." (New York Military Affairs Symposium Review)

What listeners say about Stilwell and Mountbatten in Burma: Allies at War, 1943-1944