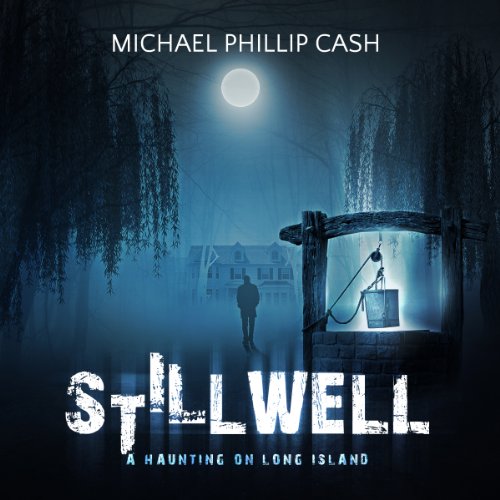 By: Michael Phillip Cash
Narrated by: Dan McGowan
Try for $0.00

Paul Russo's wife just died. While trying to get his family's life back in order, Paul is being tormented by a demon who is holding his wife's spirit hostage on the other side. His fate is intertwined with an old haunted mansion on the north shore of Long Island called Stillwell Manor. Paul must find clues dating back hundreds of years to set his wife's soul free.

What listeners say about Stillwell

This audiobook captures your attention and pulls at your heart from the very beginning. By the end of the prologue you are already attached to its characters. This ghostly love story, that spans both the past and the present, keeps your attention and draws you along with both its poignancy and its creepiness. The battle, heartache and emotions of fighting cancer and loosing the person you love is expertly and concisely written, breaking your heart for the characters and making you even more invested in them. The author weaves a captivating tale that keeps you turning the pages and has a twist at the end that is very unexpected. The narrator does a great job of bringing the characters to life, creating tension, love, fear and sorrow in all the right parts. It is a very beautiful, poignant yet creepy story that I thoroughly enjoyed listening to. I received this audiobook from the author in exchange for an honest review.

This book is very entertaining! I am going to read more from this author. The book has many layers to it...grief, ghosts and a family trying to move on from it's loss.

Would you consider the audio edition of Stillwell to be better than the print version?

I didn't read the print version, just listened to this version, but having a story read aloud really brings it to life.

What was one of the most memorable moments of Stillwell?

There are so many great moments in this book! From ghosts, to dreams, to a crazy ending...where would I even start?!

Have you listened to any of Dan McGowan’s other performances before? How does this one compare?

I listened to Dan McGowan's Audible version of Monsterland and I actually liked this one better. Maybe it was the lack of too many teenage voices.

The pivotal end scene was POWERFUL! Wow..... I really didn't see that coming and you'll know what I'm talking about when you get there.

Stillwell: A Haunting on Long Island

When I read the product description for Stillwell: A Haunting on Long Island, I wasn’t sure if this would turn out to be a ghost story or a love story. Since I enjoy both, I decided to give it a try. The author wrote a beautifully haunting tale of love, loss, grief and acceptance.

I received a free copy of this book from the publisher via NetGalley in exchange for my unbiased review. I enjoyed the book so much that I purchased the audio-book version .

I really enjoyed the narrator. Dan McGowan did a remarkable job!

I'd heard this book advertised on the radio and then read a few reviews on amazon touting its fresh approach to an oft visited subject matter. All I can say is this book had very unrealized potential. One particular thing I really disliked (besides the epilogue - if you do listen, do the math on that one) was the way the main character kept revisiting the relevant location. I suppose the author intended him to just be "inexplicably being drawn" but it didn't translate. None of his reasons ever made sense. Just not plausible, even for a ghost story.

This story needed much deeper character development than what was given. It's as if the author came up with a pretty decent and fairly original outline, but then lost the originality when connecting those plot points and instead relied on a checklist of shallow and clichéd filler. I don't even mind a cliché if it's used in a clever way to drive the plot. Instead it became pretty predictable, and the filler never resolved to anything unique in its own right, so it didn't make sense to the story. So much so that by the end and the big plot twist reveal, which was fairly interesting, the impact was lost for me. Again, lots of potential, just unrealized for me.

It was fine if it was intended to just be read to me, but I suppose I've been spoiled by narrators who create personas/voices for each character and act it out. One couldn't really grasp what the character was feeling until the statement was followed by "he screamed" or "she cried", which made it more difficult to connect with already flat characters.