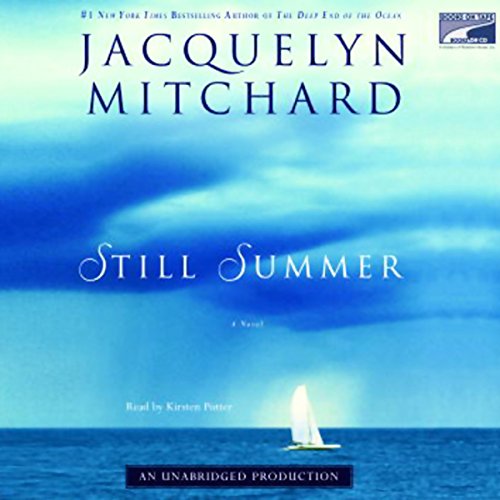 By: Jacquelyn Mitchard
Narrated by: Kirsten Potter
Free with a 30-day trial

Hailed as one of America’s most insightful and inventive storytellers, number one New York Times best-selling author Jacquelyn Mitchard now takes listeners on a breathtaking journey of suspense and high adventure.

Back in high school, Tracy, Olivia, and Holly were known as The Godmothers, the girls everyone wanted to be and know. Unlike many friendships, their bond survived the years. Now 20 years later, their glamorous leader, Olivia, whose wealthy Italian husband has died, suggests they reunite on her return to the United States with a luxury sailboat crossing in the Caribbean. With Tracy’s college-aged daughter and an attentive two-man crew, they sail into paradise.

But then, the smallest mistake triggers a series of devastating events. Suddenly, in a desperate fight for survival, the women battle the elements, the threat of modern-day piracy, and their own frailties. Still Summer is at once a spellbinding adventure and a story about the bonds that hold friend to friend and mothers to daughters, and how facing our own mortality tests the truth of everything we think we know.

"Fans will enjoy this mix of seafaring adventure and romantic suspense." (Booklist)

What listeners say about Still Summer

This is an adventure and not a mystery, because the story unfolds as one expects it to - plenty of hints are given. Although I was motivated to skip sections because of the female bickering and ruminations, the adventure kept me hooked.
I didn't care for the voices and tone of the characters on the vessel Big Spender. Otherwise, the narration was good.