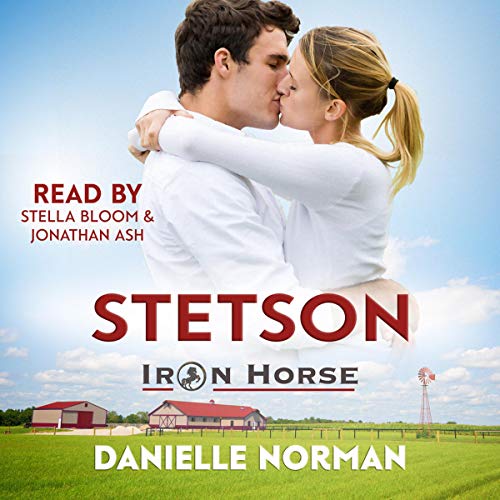 By: Danielle Norman
Narrated by: Jonathan Ash,Stella Bloom
Try for $0.00

The only thing fancy about London Kelly was her name.
She was a jeans-and-boots kind of girl.
Her perfume was the smell of hay.
And her days were spent in the saddle.
Except for a few bumps in the road she had a pretty good life.

Until....
Her dad died.
Now, she’s left running the family cattle ranch and horse stables.
The sexy sheriff has decided that he wants more than a one night stand.
And her employees believe that she has no business running a ranch.

What listeners say about Stetson

The heroine ruined it for me.

The heroine killed the story for me at the 11th hour.

The story had a few flaws that I was happy to overlook at the beginning. However, as the story developed, I just couldn't get past the way the heroine handled matters, specially the way the she turned on the hero when he was simply trying to help her.

Not even the happily ever after made me like her again.

This book is the first I’ve read/ listened to by Danielle Norman and it won’t be my last. It was short, sweet, and sexy. It was well written and kept my interest, it had a little mystery going on - although it was obvious with one of the characters from the get go, which I think was the point. It gave you someone to dislike. But, there was other things that made you wonder and I loved that aspect. There was one really emotional scene that I hadn’t anticipated and applause to the author for making me cry in my kitchen.

London and Brady were so good together, the relationship had very little drama and the chemistry between them was on fire. I loved their banter and that made the chemistry even more palpable. One of the other things that I liked was how London and her sisters were dealing with having a business in a very male driven world and their way of dealing with things, especially since they were also still grieving.

I am hoping Paris and Holland both have books because I need their stories stat!

The narration was superb. Stella Bloom is a wonderful narrator and I’ve enjoyed many of her performances, this one wasn’t the exception, she was London - the smart and sassy ranch owner with insecurities was played perfectly. Jonathan Ash was a new narrator to me and I thought he was fantastic, his tone suited the sweet and charming police officer. I’ll definitely be listening to more of his work. I thought their voices complemented each other and made for easy listening.
There were no production issues of note.

Loving the start of this series!

I really enjoyed listening to this book and look forward to reading the rest of the series. This is my first read/listen of a Danielle Norman book and I couldn't have been happier. The story was well written and I loved all the characters, well except for one lol, those that have read it know who and why. London and Brayden have fantastic chemistry and the narrators did a good job portraying that.

I loved this book!

I really enjoyed this storyline. From the moment I started listening I was intrigued. A Heartwarming and charming love story, with drama, family and betrayal made this a perfect combination. I loved the characters and story setting, because who doesn’t love horses and cops? lol
The narration was amazing! This book has an HEA and part of a series but it is totally a standalone. I highly recommend this book!

A cute short story. It was my first book by this author. I enjoyed it and i really liked the Kelly sisters. I will continue onto the next book in the series.

I love this family and their story! So far Danielle Norman has never let me down with her words!

This was a great story about a farm girl in Florida who builds a relationship with an old classmate. Family bonds, romance, and a great storyline made this a great listen. The dual narration was awesome!

This storyline was pretty straight forward and I kind of had an issue with how they first hooked up. It was addressed after the fact but I still didn’t like it. Because of that I couldn’t connect as much as I’d like to.

I liked the little bit of suspense (not mystery, you totally know who the a$$h@le is the entire time) that is woven in and just enough unknowns that keep you scratching your head.

As always the author has me laughing.