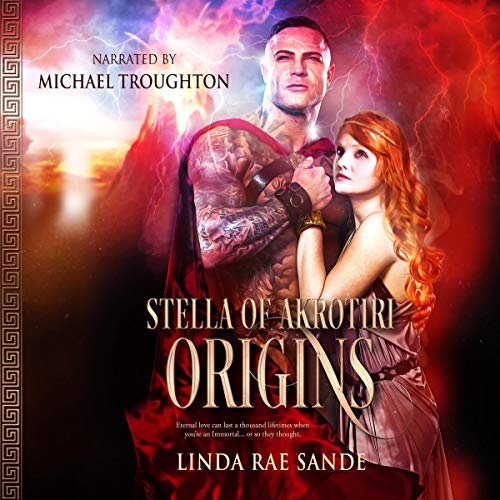 Stella of Akrotiri: Origins: An Ancient Greek Tale of Immortals

By: Linda Rae Sande
Narrated by: Michael Troughton
Try for $0.00

Immortality can be a lonely existence, especially when the world is about to implode.

For over 600 years, Darius of Agremon has fought wars on behalf of those who needed his skills in combat. As a lechagos on Strongili, he spends his days commanding the Minoan coastguardsmen against pirates and marauders. His nights are spent alone, for despite having had wives in the past, he has watched them all grow old and die, childless, as he continues to live.

So when he senses immortality in an olive farmer’s young daughter, Darius bargains to take her to wife when she is old enough to marry.

A foundling, Stella works in her adoptive father’s orchard above Akrotiri, climbing the ancient trees to prune and to harvest the strings of pearls from their branches. She fears invaders when she watches flaming arrows arc in the sky, a sign the island is under attack. She worries about how the ground quakes beneath her feet and steam erupts from cracks in the ground. She wonders at the odd tingling she experiences whenever Darius of Agremon is near, a sensation not unlike the one she feels when spending time in the oldest trees.

Unaware of the arrangement her father has made with the lechagos, Stella thinks she has been sold into slavery when Darius comes for her. Her youth has been spent admiring the man who helped her father’s business thrive. Now she has only contempt for him and his hard-headed manner, despite the pleasures he incites whenever he claims her body.

While the earth trembles and a volcano threatens to destroy the island of Strongili, these two will have to forge a relationship that will last far longer than a lifetime - one that must endure an eternity and the disaster that’s about to wipe out the only home Stella has ever known.

What listeners say about Stella of Akrotiri: Origins: An Ancient Greek Tale of Immortals