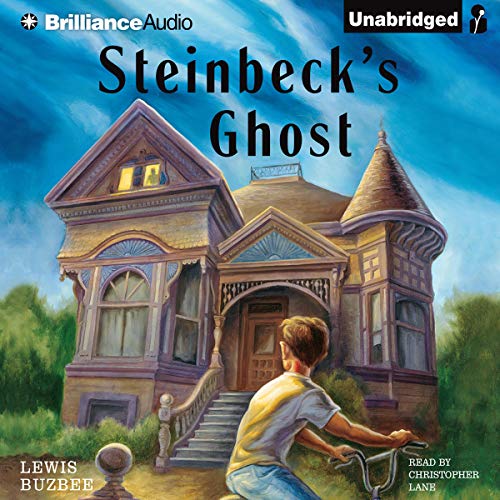 It's been two months since Travis' family moved from their shabby old house to a development so new that it seems totally unreal. There's one place, though, where Travis can still connect with his old life: the Salinas library. Travis and his family used to go there together every Saturday, but now he bikes to it alone, re-reading his favorite books.

It's only natural that Travis likes the work of John Steinbeck - after all, Salinas is Steinbeck's hometown. But that can't explain why suddenly Travis is seeing Steinbeck's characters spring to life. There's the homeless man in the alley behind the library, the line of figures at the top of a nearby ridge, the boy who writes by night in an attic bedroom. Travis has met them all before - as a reader. But why are they here now? And how?

As Travis struggles to answer these questions, budget cuts threaten his library. And so he embarks on a journey through Steinbeck's beautiful California landscape, looking for a way to save his safe haven. It's only then that he begins to sort out fact from fiction, discovering the many ways a story can come alive - and stumbling into a story Steinbeck never told.

If you are a Steinbeck buff you will really like this book. It is a kid's book (probably 7th or 8th grade level) but it is written, and read, well enough that I only occasionally noticed it was a kid's book. It has whetted my appetite to go back into my Steinbeck collection and read some of the lesser know Steinbeck stories.

I bought this mainly because of my love of Steinbeck and out of curiosity and was not disappointed despite being an adult! The story itself is more that of saving the libary rather than, I would say, Steinbeck characters coming to life but what I did like about it is that it would be a good introduction for children to Steinbeck, would give a basic insight into his writing and to the man himself. It even had me reaching for my collection again and re-reading The Pastures of Heaven. I would recommend this as an easy listening book. The narrator sets the scene for each character very well and he is very easy to listen to and makes it interesting.