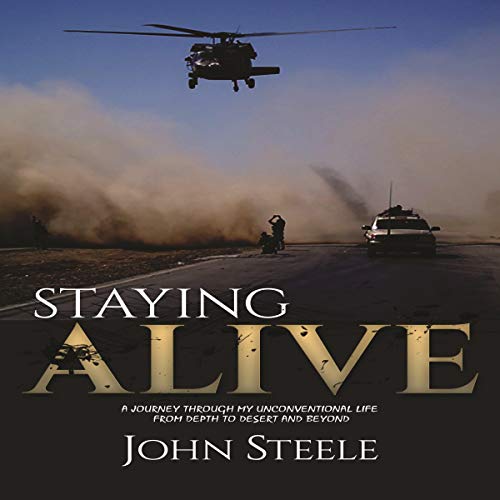 By: John Steele
Narrated by: Mathew Hall
Try for $0.00

John Steele left his family and home at the tender age of 16 to join the Royal Navy. In a select branch of only 200, he subsequently qualified as the youngest clearance diver at that time. He then moved on to a life as a commercial oilfield diver, and for 22 years worked in the unforgiving depths of the North Sea and Persian Gulf.

In 2004 a new industry was opening up. After an intense reeducation he secured a job with one of the largest private security companies working with the reconstruction of Iraq. This involved explosive and gunshot filled daily runs deep into the heart of the Mosul and Baghdad red zones at the height of the postwar troubles.

Security tasks followed in Africa involving anti-piracy duties aboard ships off the dangerous Somali coastline. An advisory position was then offered in the swamp area around Brass Island in Bayelsa State working with the Nigerian military’s Joint Task Force. He now has a gold-prospecting operation 230km above the Arctic Circle in a beautiful but wild part of Finland. He successfully obtained his own gold claim in 2019, which was aptly named “Kaikki Peliin” or in English "all in".

"As I U-turned, my wheels slipped off the tarmac into the gooey mud and the vehicle hesitated. I slipped into four-wheel drive and gassed it. My vehicle took the brunt of incoming PKM light machine gun and AK47 fire from insurgents hidden in the fruit and veg stand and sand berms. The rounds impacting the vehicle’s armour sounded like sledgehammers and eventually at least one found a weak spot and entered the engine bay. I could feel the engine dying as I desperately tried to move away from the junction. A few seconds later, I ended up facing away from the contact point with a dead engine stuck in first gear, holding the key down and chugging up the road with flat tyres and moving on the batteries and starter motor! We came to a grinding halt in the middle of the kill zone..."

What listeners say about Staying Alive