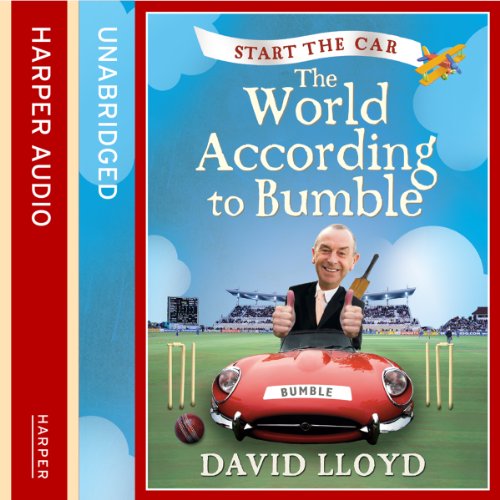 David "Bumble" Lloyd is a legend in our living rooms, a genuine "good bloke" all cricket fans feel they know inside out because of his infectious, larger-than-life personality and that distinctive Lancashire burr.

Bumble has become the one constant for passionate English fans in cricket's rapidly changing landscape. He has earned cult status as a commentator and pundit, with viewers loving his unerring dedication to the game's great fables.

The World According to Bumble: Start the Car revels in the quirkier and humorous side of cricket, while offering behind-the-scenes action of Lloyd's years spent following cricket around the globe, from Accrington to Lahore.

Bumble waxes lyrical on everything from the genius of Shane Warne to the merits of a Lancashire hotpot … and the delights of finishing the day with a couple of pints and a curry.

Enjoy the camaraderie that exists among the SkySports team - including former England captains Sir Ian Botham, Michael Atherton, Nasser Hussain, and David Gower - and laugh out loud at the stories and anecdotes which have forged Bumble's character.

Whether he is holding up play to retrieve lost balls from the top of sight-screens, or enacting mock pitch reports from car parks, Bumble is capable of stealing the limelight at all times.

What listeners say about Start the Car

The lovely, true to Lancashire, Bumble tells a usual sports autobiog. At times, he presents an almost creepy toe-licking, obsequient acknowledgement of Sky's wonderful TV service. He is no writer. A tedious monotony of anecdote, and then poorly presented - a cliche ridden monologue. Cricket on TV is exciting to see and his apposite comments are memorable, but how dull to hear these tales and comments which are dry and lack lustre out of context.
It may be fun for him, but it does not transfer to an audience. His mates are world names, but he falls down, as many sports biographies do, on fawning to the names he drops at a regular basis. He is no Arlott, no Johnston, sadly.

Whilst a lot of this is from a good few years ago. I was still able to laugh out loud as Bumble has a soothing languid delivery and tells a very good tale.

If you love Bumble, you'll love this!

Really enjoyable. Listened to over 3 days and made more enjoyable by Bumble's narration. It felt like he was sitting opposite you in a pub. The book covers his playing, umpiring, coaching and broadcasting careers. He also gives you all his personal preferences from food to drink, cricket to pubs, music and even women! So if you didn't know him before, you do now. Very enjoyable.

told by a true character. cricket needs people like bumble. strongly recommended. good humour and insight into behind the scenes of England team.

Thought this was a book that would make me smile and it did not disappoint. Only part I did not enjoy was a bit in the middle where he read various newspaper reports but overall a fun time was had and I will be following this up with another of bumble's books.

He has a great voice to settle you down, he sounds like everyone's favourite uncle.

Bumble at his best

Where does Start the Car rank among all the audiobooks you’ve listened to so far?

I liked all the anecdotes

Have you listened to any of David Lloyd’s other performances? How does this one compare?

this is the first I have listened to, but won't be the last

Difficult to make this into a film, but the tag would be "Bowled over"

Any cricket lover would love this