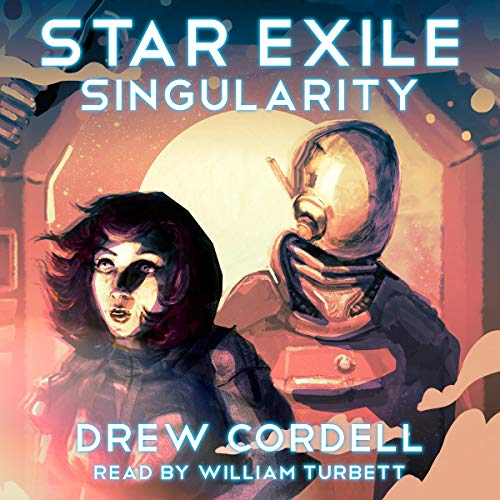 By: Drew Cordell
Narrated by: William Turbett
Try for $0.00

The isolated Eternity System is alone, overpopulated, starved of resources, and dying.... A 500-year-old peace treaty between the Dalthaxian Alliance and Salgon Empire is expiring and the war to end all wars looms. The Eternity System will not survive another war.

A grim struggle for survival
When the Eternity Treaty expires, an uninhabited and coveted no-man’s-land with enough resources to sustain one faction indefinitely is up for grabs - the Eternity Planet. It is the key to survival.

Digital war ignites
The next generation of warfare ignites - a digital, bloodless war set in the new game universe of Eternity Online: the brainchild of the combined AI neural nets and technological prowess of both Dalthaxia and Salgon. Everything is changing. The war in this game universe will decide which faction will take the Eternity Planet and which will have to forge a grim exodus through the unknown to find a new home.

On the fringes of galactic civilization and on the run
Kyle Gennan, a drone operator working for a mining company on the wild fringes of civilization, finds himself on the run from the ghosts of his past and the two most powerful governments in the Eternity System. He will have to carve his own path through the stars to forge his new life if he wants any chance of experiencing Eternity.

This novel creates a unique world different than any other litrpg. The breath of fresh air was great but occasionally left me slightly confused as to what had just happened. The brief confusion was remedied and the story kept rolling on.

I heard about LitRPG a few months ago and it piqued my interest enough to want to investigate further. I wanted a standalone story to start with, and this book was just what I needed. I'll be reading more of the genre, maybe a series or two. If more books are written to make this a series, I'll be interested in reading them. As an aspiring author, I might try writing some LitRPG or GameLit myself. It seems it would be great fun.

Excellent writing and narration makes this tale very exciting and entertaining. I'm not sure if there's a book 2 but if there is then I definitely want to listen to it.

Unique Take on a Lit-RPG

One of my favorite genre is Lit-RPG. This story provides a fresh take and something new to this genre. I enjoyed the exciting story and a great narrator that went with it. Looking forward to any more books to come.

Solid adult RPG story. I really enjoy Turbett as a narrator, so I already knew that wouldn’t be an issue. The story is very unique with the work by day/play by night (but you still get rest)—any gamers dream if we’re being honest. The twists are not generally something you see coming and Turbett does a phenomenal job as always with sound effects and voice differentiations. Parents: there is mentioning of porn and other lewd activities along with some mild/moderate language. I’d read through to gauge your comfort before letting kids under 17 dig into it. This was a very enjoyable adventure and I’d recommend it to any gamer for sure. —I was given this free review copy audiobook at my request and have voluntarily left this review.

can't get past this narration. nasel monotonous voice makes this impossible to listen to. im sorry if this a a great book but the narrator is not good.

Enjoyable to start, improves even more throughout

This book starts out well, with a good balance between building the worlds (real and ingame) and establishing two interesting main characters, but it really steps up a gear once the full party is established as the balance of characters works even better.

A lot of litrpg tends to opt for a fantasy setting for the ingame world so as to provide more of a contrast with a real world that has to be hi-tech or sci-fi enough to support the level of game immersion, that is not the case with this one as both are fairly heavily intertwined with each other with real and ingame events impacting on each other quite significantly in a manner that works well overall.

The narrator gave an enjoyable performance that nicely enhanced the book with a wide range of distinctive tones and voices to help bring the cast to life, while at the same time not being over the top and distracting from the story either.

Overall, a strong first entry in this series and I am looking forward to listening to the next one when it is released.

I was surprised by how I was drawn into the story

at first I was unsure how much I would enjoy this book but it became very addictive and I found myself wanting just one more chapter each time. the story develops at a good pace and the narrator does a good job with bringing the characters to life. all in all I really enjoyed this one!