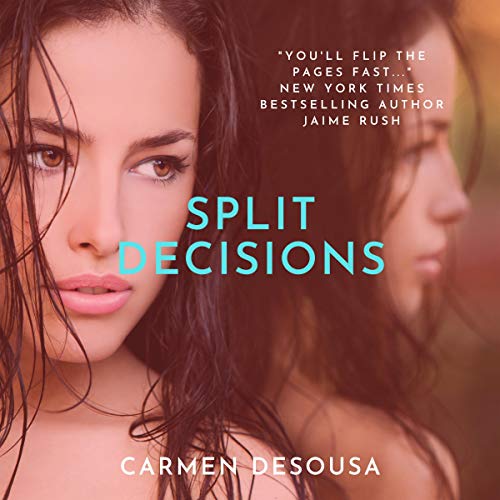 By: Carmen DeSousa
Narrated by: Natalie Duke
Try for $0.00

Split Decisions is the follow-up story to She Belongs to Me, a "what if" type of story that explores the questions we often ask ourselves about our life and the choices we've made. Get ready...this is not your normal romantic-suspense...This is romantic-suspense with a supernatural twist.

Sometimes you want something so badly you are willing to abandon everything you've ever known - including yourself.

Eighteen years ago, Jaynee Monroe married the man of her dreams, became the mother of four, and fulfilled her career goals. About to turn 40, she senses something is missing from her idyllic life. While Googling her name in an attempt to find herself, she unearths something so impossible, she contemplates her own sanity. Seeking answers, she embarks on a journey to discover the truth, only to end up abducted by a deranged stranger who insists on calling her Caycee.

Caycee took the road less traveled. After rejecting a marriage proposal from the only decent man she has ever known, she ventures to California to become famous. Eighteen years later, success has left her alone and miserable. Attempting to locate her lost love on Facebook, she discovers his infatuation with her. Not only does his presumed-dead wife have Caycee's uncommon middle name, it also appears he has photoshopped Caycee's face over his wife's face.

Never could Caycee and Jaynee have imagined that decisions they made years earlier would threaten not only their lives, but also their loved ones. Caycee must now reunite with the southern gent she dismissed 18 years ago and convince him to accompany her to New York to locate his wife, the most important person in both their lives.

What listeners say about Split Decisions

This book was very hard to stop listening to. It's a follow up book to She Belongs to Me but you don't have to listen to the first book (although you should) since this book gives enough background so you aren't lost. This is a romantic suspense with paranormal thrown in. 18 years ago, Jaynee met Jordan and after a whirlwind courtship married within a few days. She had a hard decision to make about whether to marry him or to just pull up stakes and go to California. As Jaynee approaches her 40th birthday, she starts feeling unsettled. She does a Google search and what she finds really has her feeling unsettled. There's someone who looks exactly like her but has lived a completely different life. The events that are started when Jaynee meets Caycee are more unsettling. I've never read a premise like this one and it's very good. I liked the narration from Natalie Duke that brought the story to life.

An enjoyable well written riveting romantic suspense. This engaging addicting suspense had me addicted page after page. This amazing storyline has incredible twists and turns, unbearable suspense,  mystery, danger, in an emotional satisfying plot that all wraps up with an excellent plot twist. The characters are well developed and interesting.  The narration had me glued to this story with every chapter, amazing emotion and character differences, really adding suspense and emotion.