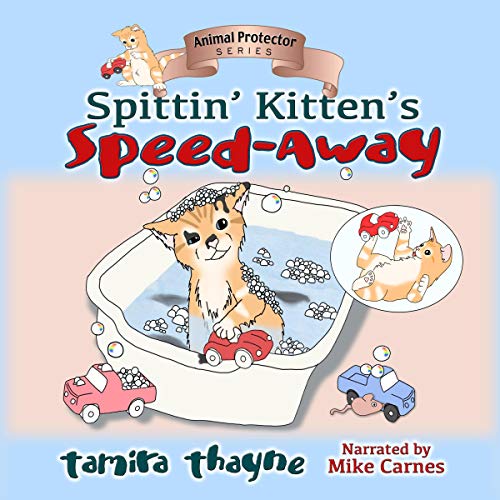 The little, orange kitten stopped and scratched his neck. “Fleas,” he mumbled to himself; he could feel the bugs wandering around in his fur, stopping for a bite every now and again. Yuk! He was hungry, too, but he knew his mother was struggling to feed him and his four siblings.

Spittin’ plopped himself down in their nest beside the barn. Had the humans simply forgotten to put food out? he wondered. Maybe he could be the one to remind them.

Spittin’ had never been around people before, but - pushing his fear aside - he bravely left the den in search of help. When he reached the other side of the barn, he jumped back in shock. In front of him splayed out a whole big world he’d never known existed!

Soon Spittin’ finds himself on an unexpected adventure - he flies through the air, scrambles for a hiding place, and even takes an unexpected ride in the engine of a car. Where will the little kitten end up, and will he get help for his family?

Find out in Spittin’ Kitten’s Speed-Away, perfect for ages seven and up. The audiobook also features vocabulary builders throughout the story and excels as part of a humane education curriculum.