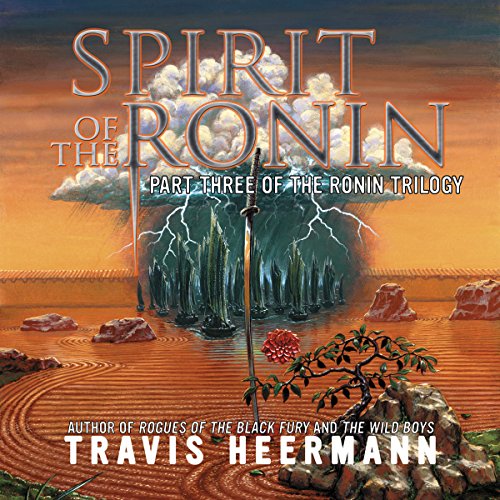 Spirit of the Ronin

By: Travis Heermann
Narrated by: David Doersch
Try for $0.00

In 13th-century Japan, the ronin Ken'ishi's fondest wish has been granted - he has found service with a powerful samurai lord.

But the underworld crime boss known as Green Tiger lurks in the shadows of Lord Tsunetomo's retinue, and Ken'ishi's honor is tested when learns his new master is married to Kazuko, the only woman he has ever loved. His unknown lineage holds dangerous secrets that could destroy him, and his sword, the magical relic called Silver Crane, holds the key to his past...and his future.

With enemies, temptation, and strife assailing him on all sides, Ken'ishi's very soul falls into jeopardy - even as Khubilai Khan's Mongol hordes plot their next attack. Can Ken'ishi defeat Green Tiger, defend his homeland from the barbarian invaders, and remain true to his heart, his lord, and his honor? If you love romance, intrigue and action on an epic scale, don't miss this stunning climax to the Ronin Trilogy.

What listeners say about Spirit of the Ronin

I loved this whole trilogy, I heard the first story on librivox, the second one I have as a book, and this one here finished it off. what a great story, totally worth the time to read it, I was only sad that it ended.

the author has done a great job at painting a vivid portrait of another time and another place. In the story you can feel, smell and taste the world of the samurai. incredible attention to detail, in depth research describing period lifestyles. The commitment and devotion to becoming a samurai warrior is portrayed perfectly.
Great story, action , with a hint of political romance thrown in.
very well done.

What a great Listen!

What made the experience of listening to Spirit of the Ronin the most enjoyable?

The story was very intense and kept the listener wanting more.

What other book might you compare Spirit of the Ronin to and why?

What does David Doersch bring to the story that you wouldn’t experience if you just read the book?

the narrator in my opinion nailed it how he was able to be precise in some of the Japanese pronunciations.

Darkness in plain site. all around you..

The series is by far one of the best I've listened to and read. It is highly recommended. The author has done great things and has just won Best Screenplay Horror/Fantasy 2018 for his story Where the Devil Resides. Travis Heermann has the talent to go big!

My review is bias

Fantastic adventure with alot of heart!

Samurais, Ronins, princesses, magical creatures and abilities. A hero with a destiny struggling to find his place in a world full of conflict and still holds true to his values.....what's not to love!!?

The fantastic adventure that Travis Heerman creates truly inspires you to think about destiny and what defines us as individuals. This book is a great ending to an awesome trilogy.

The events and settings Travis Heerman discribes in this book gives you enough imagery to help you imagine this world while allowing you to paint the pictures of this world and its characters to fit your own minds ideas and preferences.

The narrator was truly prefound, articulate and moving. Which allowed me to experience the highs and lows these characters go through. You could tell he also was enjoying this book.

I love this series. I was fortunate enough to find the first preformed version of book 1, Sword of the Ronin, in podcast form and since that day I have been hooked. This now completes my Ronin collection and I can't wait to see what other imaginative adventures this amazing author comes up with for us.

This narrator was much better than the book 2 narrator. Can you please re-produce the first two wit this narrator?

Can I give more than 5 stars?

When an audio book is good it will have a great story & the perfect narrator. This one had both. I am blown away. Keneeshi's whole life was full of sadness, trauma, war & death. No wonder his spirit drifted so he would become an Onie. Kazicko was his true love. Alas she was not his to have so he became the best Samurai he could be. He was full of knowledge, dedication, discipline and devotion. He fought for truth and freedom. It was no wonder he wanted Kazicko. She was such a lady. Graceful, caring, determined & above all a fighter. Through their turmoil in the story the ending was inevitable. I will be checking more out by this author. A must read!

The narration is so much better than the previous book. I’m not adept at Japanese so I’m unsure as to their accuracy.

Story was ok, maybe this just isn’t my genre. With the realities of history this series should be reserved for adults.

Great end to a great trilogy!

This finishes up the incredible Ronin Trilogy in a manner that is consistent with the whole story. This stories are so wonderful that I sincerely hope and pray that Travis will continue to write further stories with these characters. They are all so well formed that they beg to have more of their stories told. The narrators have been very good, but I still prefer Travis' original narration of the first book in the series.

Thanks for a wonderful series!

I absolutely love this trilogy and recommend that everyone checks this out of your into warriors of the past and Japanese history.

I have been listening to the ronin trilogy since pod cast of heart of the ronin, the trilogy is by far the most amazing story surrounding feudal Japan, it has accuracy, mystery, fantasy and far above all a talented wrighter that allows his listeners/readers to really become engaged in the story from chapter 1 to the end.