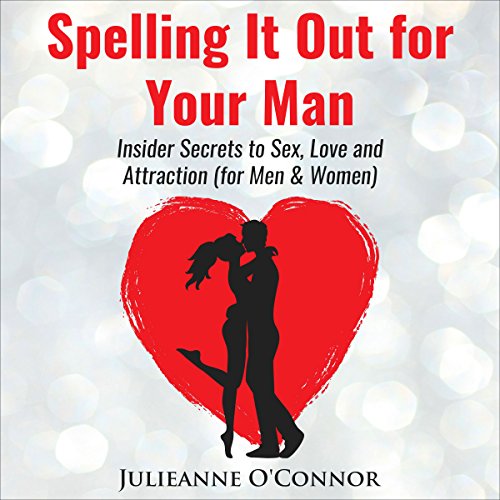 Spelling It out for Your Man

Once upon a time in the fairy tales, people risked it all for love and couples lived happily ever after. Then something changed. People became complacent, lazy, even oblivious, and began misinterpreting the most basic forms of communication. Suddenly humans were lost and the most common happily ever after was post-break-up. Yet there was still hope!

Based on the consistently repeated mistakes of many, Spelling It out for Your Man offers a candid, funny and non-judgmental view of the exploration of what's really going on in the minds of men and women regarding sex and love, as well as what entices people to attract and stay attracted to one another.

Julieanne O"Connor's intention is to inspire people to tap into their own sexuality, to release the need for the illusion of ownership, and to evoke the desire in everyone to open their hearts wider still.

What listeners say about Spelling It out for Your Man

I enjoyed most of the content and humor. The end of each has a summary which is helpful but too detailed. I felt like I was hearing each chapter twice. I tried skipping but the chapter markers weren't at the beginning and end in the proper place.

Would you listen to Spelling It out for Your Man again? Why?

YES YES AND YES!! It's conversational and excellent quality. Full of incredible insights.

PUTTING RELATE BACK INTO RELATIONSHIPS! This is an excellent source of information helping you to truly ground yourself in self-worth. Inspiring!

I am your biggest fan

Fantastic book insightful, honest, candid. Be your true self, love fully, live honestly, and spell it out.