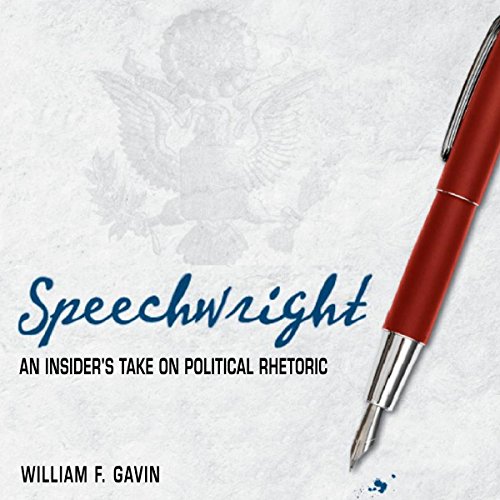 For almost 30 years, William F. Gavin wrote speeches at the highest levels of government. Speechwright is his insider's view of politics, a shrewd critique of presidential and congressional rhetoric, and a personal look at the political leaders for whom he wrote speeches. While serving President Richard Nixon and candidate Ronald Reagan, Gavin advocated for "working rhetoric" - well-crafted, clear, hard-hitting arguments that did not offer visions of the unattainable, but instead limited political discourse to achievable ends reached through practical means. Filled with hard-earned wisdom about politics and its discontents, Speechwright describes Gavin's successes, his failures, and his call for political rhetoric built on strong argument rather than the mere search for eloquence.

"Gavin has written a must-read book for anyone interested in the American presidency. Both scholars and practitioners of political speechwriting will want to have this book on their shelves." (Martin J. Medhurst, Baylor University)
"Imagine a high school teacher who sends a letter to Richard Nixon and ends up in the White House, writing heartfelt speeches for Ronald Reagan and almost every other Republican of note for thirty years. It actually happened, and Bill Gavin is that guy!" (Richard Reeves, author of President Reagan: The Triumph of Imagination)
"However unlikely Gavin considers the string of events that led to his career as a 'speechwright,' this book reveals his gifts and inspires others to respond to such a calling." (Linda B. Hobgood, University of Richmond)

What listeners say about Speechwright