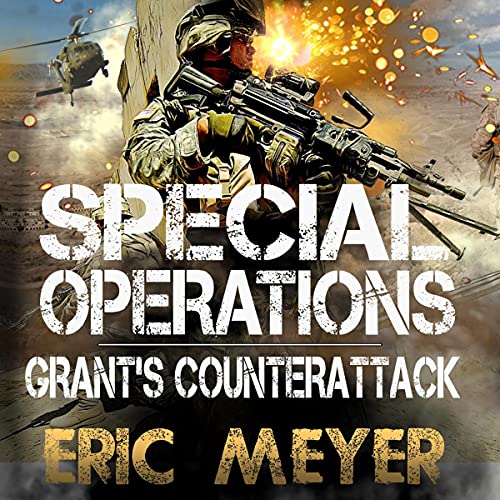 By: Eric Meyer
Narrated by: Henry Marshall
Try for $0.00

The enemy leads them into an ambush that leaves the Company at risk of total annihilation. Grant counterattacks with his small Ranger unit and turns defeat into victory.

Yet the victory is short-lived, for he finds himself under close arrest following a trumped-up charge. His career is over, and he faces a long term of imprisonment. There is nothing he can do to put things right from a prison cell. But there is much he can do if he escapes. Like hunting down and killing the lethal sniper Haji Gul, a man still at large who threatens the lives of American troops. He is thought to be a personal friend of Mullah Omar and an ally of America’s number one target, Osama bin Laden. Good enough reasons to take him down.

There can only be a single outcome. Either Gul will die - or Grant will. Special Operations: Grant’s Counterattack is an incredible story of tough, violent men fighting in war-torn Afghanistan. The harshest, most hostile environment on Earth.

A full-length novel by the best-selling author of many Spec Ops books. These include the popular SEAL Team Bravo stories Heroes of Afghanistan, Raider, Echo Six, and Devil's Guard titles.

What listeners say about Special Operations


Henry Marshall is perfect for this Grant War books. He makes it a great listen.

Grant and his team track down an ace sniper who has been taking out the American army on the roads in Afghanistan. The journey takes them through Iran and Pakistan tracking him down. There is also a spy on the base telling the Taliban there every move.
Grant seems to always annoy the higher brass and gets the blame for some one else's errors and mistakes.