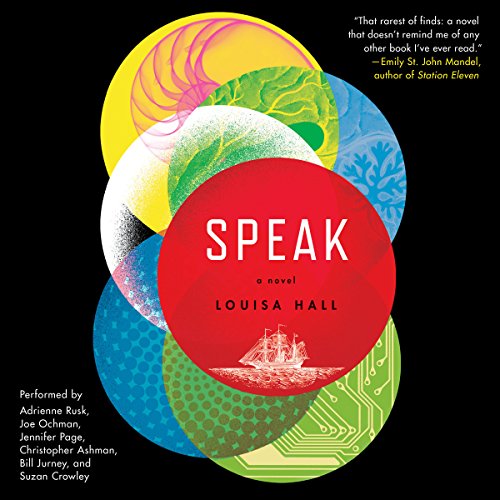 A thoughtful, poignant novel that explores the creation of artificial intelligence - illuminating the very human need for communication, connection, and understanding.

In a narrative that spans geography and time, from the Atlantic Ocean in the 17th century to a correctional institute in Texas in the near future, and told from the perspectives of five very different characters, Speak considers what it means to be human and what it means to be less than fully alive.

A young Puritan woman travels to the New World with her unwanted new husband. Alan Turing, the renowned mathematician and code breaker, writes letters to his best friend's mother. A Jewish refugee and professor of computer science struggles to reconnect with his increasingly detached wife. An isolated and traumatized young girl exchanges messages with an intelligent software program. A former Silicon Valley wunderkind is imprisoned for creating illegal lifelike dolls.

Each of these characters is attempting to communicate across gaps - to estranged spouses, lost friends, future readers, or a computer program that may or may not understand them. In dazzling and electrifying prose, Louisa Hall explores how the chasm between computer and human - shrinking rapidly with today's technological advances - echoes the gaps that exist between ordinary people. Though each speaks from a distinct place and moment in time, all five characters share the need to express themselves while simultaneously wondering if they will ever be heard or understood.

What listeners say about Speak

I can't quite explain what it is like to listen to these voices. It really is like nothing I've ever read.
Definitely worth your time.

A journey in meaning.

This is a haunting exploration of what it means to have language and to hear and speak it. The lives of the characters captured in blocks of text and passed down and ultimately finding their way beyond our world.
My hat is off to the narrators for giving depth and feeling to this poignant and moving work. It is more diary, or multiple diary, than novel, but it accomplishes its work. You will think deeply on what it means to speak, what it is to hear, and what we are to feel. The voice of Mary is particularly compelling. This Audible production is top drawer.

Such a beautiful, beautiful book. A+ prose and characters. This is not a plot heavy book. Each of the characters has a story that ties together with the other stories in some way.

I loved all of the narrators except for Bill Jurney. His voice just didn't suit the character and his reading was a little awkward. However, his parts are few and pretty short, so it wasn't too painful. The rest of the narrators are so good that it's worth getting the audiobook version. I tried to think of one of the others to single out as being the best, but couldn't decide because they're all perfection.

Takes a WHILE to sink in, but by the end its great

It took a long time for me to get invested in this novel. There are so many perspectives and it is quite unclear what the novel is trying to say or how the stories correlate to each other. By the end, I'm still not 100% sure I fully understand the connections or the full perspective the novel was trying to display, but thinking about it has been a ton of fun and I keep going back to different interpretations of the story. Even though it is a story about AI from 6 different perspectives, the focus stays firmly on the humanity of the characters and their interpersonal relationships as a way of digging into sci-fi concepts. I would certainly say this novel isn't for everyone, as it takes a long time (basically to the end of Part II) for it to get really interesting.

Almost all the voice talent is great, except for the person who voices Karl Dettmann, which is why I gave the performances a 4 instead of a 5.

How can you not like a novel with a plot line that includes a tech company executive being imprisoned for excessive hubris?

Caveat: I binge listened to this book on a cross country auto trip,. It is possible that I missed occasional plot connection and some nuance.

You don't need me to describe the plot. it is reviewed elsewhere. If that interests you, then the only question is whether the book delivers on its promise. In this case it generally does. The plot is quite intriguing. I like having different narrators for different voices. I was put off by one of the narrators as he sort of made his character both mentally and emotionally challenged. I now realize that the character probably was. The order of the chapters is difficult to follow in the way there are so many jumps in time. If I were to read this book in hard copy, I would read it chronologically. I may yet do so.

This was such a unique book. I loved every word.

Do you want a read that takes you into the past, but that is also full of science fiction? This author challenges both technology dependence and our responsibility to any artificial intelligence that we create. It is worthy of your credit and time. I had no buyers remorse.

How do we define self awareness, why, for who?

An excellent study of the human condition, or rather, the mystery of selfawareness without full knowledge. Asks why would one restrict this to the human form. From 1660 to 2040, across 7 voices, the question remains unanswered. Thought provoking and lyrically written, a joy and an eye opener.

This may be one of the most influential books to live onto the future.

This book is a bridge to the hardest truths that lie in the bits of our ever expanding knowledge, and human capacity to evolve into deeper realms of consciousness. What is life? Who are we as face what we can and will be one day?

Every character was played (and written, of course!) with such finesse. Amazing talent all the way around.