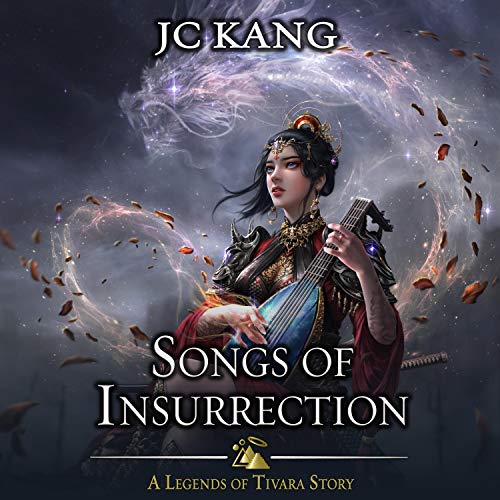 Lose yourself in this fusion of Asian and Western fantasy, which critics extol as "wonderfully opulent", "Breathtaking", and "Unique".

Only the lost magic of Dragon Songs can save the world. Only an awkward girl with the perfect voice can rediscover it.

The Dragon Singers of old summoned typhoons and routed armies, liberating mankind from the orcs before fading into legend. Now, with the world again facing a new cataclysm, the power of music stirs in Kaiya, an a naïve misfit with the perfect voice.

Without a master to guide her, she must rely on Hardeep, a disgraced foreign paladin, to help awaken her latent magic. His motives might not be entirely noble. When he leads her to the fabled Dragon Scale Lute, which only a Dragon Singer can wield, it is up to Black Lotus Clan to intervene.

Because the instrument’s fell power can save the world....

"Part spy thriller, part epic fantasy, and part romance, this book really has something for everyone."

"Smartly paced, with cross-cutting chapters that advance the plot along its intertwined story lines, this novel propels the reader through its colorful narrative. The author carefully balances action and intrigue with a modest fantasy element to keep the story's plot twists unpredictable."

What listeners say about Songs of Insurrection

The story here is overall a good one. The MC suffers a little from prodigy syndrome, learning a lot over a couple of days with little effort, but the magic itself has nice a nice cost/benefit balance. World building is generally done well and exposition is character and scene appropriate, though sometimes repetitive. The story does a good job of making you curious about the wider world. I plan to continue the series to see where it goes.

Narration was good overall, especially shining on pronunciation of Chinese and fantasy names and places. She does not have a huge range of male voices, which makes up the majority of the speaking parts apart from the main cast, but it didn't bother me too much.

The editing was where I ran into difficulties most. It sounds like they cut out a lot of the pauses between sentences/paragraphs so there is more than a few times when statements are right on top of each other which messes with the flow and doesn't allow things to land and sink in. I noticed this with the Prelude novella as well, and assume it will be the same going forward, which is a shame.

Not important for the story or anything, but props to the cover artist for this book and the rest of the books in the series.

Captivating start to the series

This first book in the Dragon Song series is not really a tale of dragons, it is a story full of intrigue, magic, treachery, excitement and suspense. It captivates you with great descriptive writing, easy to listen to narration, an intriguing plot and appealing characters. Kaiya is innocent, brave and has hidden depths that she is just beginning to discover. Seen as a political tool, she is manipulated from every angle and your heart aches for her. Hardeep skills are fascinating and you can not help but wonder what his motivation is, what the depth of his skills actually are and what he really wants. I loved Jie and Tian's characters, the hints of attraction, their martial skills and subterfuge, all adds to their appeal and to the books excitement. You are unsure right to the end as to who are traitors and who are not; is the one that is revealed the mastermind or just one of the manipulated, and who is behind the Water Snake Clan? The narrator fits the book welI, she brings the characters to life and moves the story along at just the right pace. I look forward to finding out more and listening to the rest of this epic fantasy series.

the world building in this book is so well done that you are looking forward to the next book.