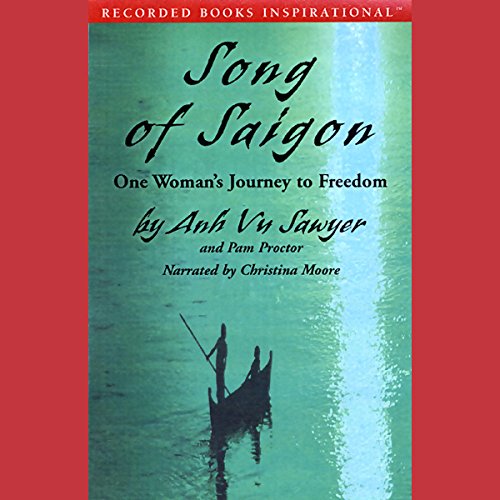 Anh Vu Sawyer is an acclaimed Christian author. The poignant memoir of her escape from war-torn Vietnam, Song of Saigon has touched the hearts of countless readers the world over.

Anh Vu Sawyer was a 20-year-old medical student in Saigon in March of 1975. As the rumors spread of an imminent siege, she was certain that even if the Viet Cong took the city, her family would be safe in God's hands. All they needed was a way out. Tracing her family's harrowing journey out of Vietnam and to the United States, Anh offers a powerful example of the strength of faith and God's enduring grace.

This profoundly affecting true story of one family's experiences and survival in the face of enormous hardships is heart-wrenching at times, and joyous at others. With a dramatic narration by Christina Moore, Song of Saigon is a thrilling listen.

"Poignant, well-told....This is a moving story." (Publishers Weekly)
"A stirring testament to the tenacity of the human spirit." (Booklist)

Being an American of Vietnamese heritage, this book peaked my interest as hearing of the ways God worked in this woman's life. It is a very enlightening account of the things she endured in South Vietnam during the war and how she came to America to build her family, only to be called by God to return back to Vietnam as a missionary years later. Great inspirational listening and she gives great insight on how Christians can best display their faith and grace without seeming "high and mighty", but humble and forgiving.

This vivid account of a near impossible survival and escape from the horrors of wartime Vietnam brings the listener along to share the blessings and joy and miracles of survival and rewards of faith. History, culture, and a brilliantly told personal story are interwoven to make this a memorable journey for all of us that we're a part of the Vietnam and American war. Most of all it is a testament to faith, love, and courage.

This book may be enjoyed by a more fundamentalist believer than I am.

I am a committed Christian and, while I enjoyed hearing about the author's commitment to her religion, I was disappointed in her belief that homosexuality is basically a sin. I believe that this attitude fosters a feeling of superiority among fundamentalist Christians.

Would you listen to another book narrated by Christina Moore?

If you could play editor, what scene or scenes would you have cut from Song of Saigon?

I would cut all references to homosexuality.