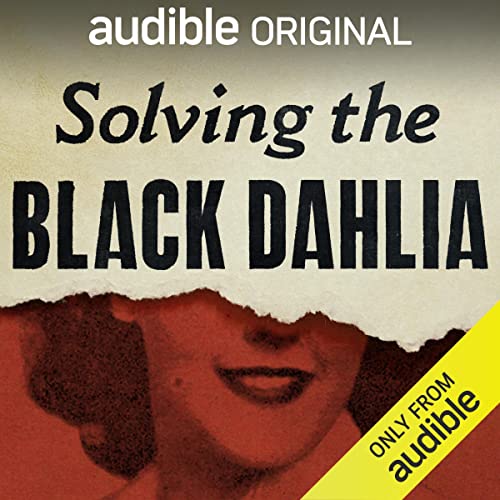 Go Behind the Scenes of Solving the Black Dahlia

About the Creator, Writer, and Performer

Douglas Laux is a former case officer for the Central Intelligence Agency, having served undercover in the Middle East and Afghanistan for seven years. Upon leaving the CIA, Doug wrote The New York Times best-selling memoir, Left of Boom, about his experience as a CIA officer in the trenches of the "war on terror," building sources within the Taliban and al Qaeda and uncovering the largest IED network in the world. Doug is fluent in Pashto and speaks Japanese and Spanish. Presidents Barack Obama and Joe Biden have recognized him for his service. Doug is a creator, executive producer, and on camera investigator in the TV documentary series Finding Escobar's Millions.

About the Executive Producer and Editor

Heather J. Miller is a seasoned writer and producer for audio, scripted and non-fiction shows like Booze Traveler, Deadliest Catch, Hell’s Kitchen, and Exposure on Hulu. She’s a voracious student of the human condition and classically trained vocalist and artist most recently seen at Los Angeles's Eli and Edythe Broad Stage. A native of Houston Texas, Heather now resides in Santa Monica, CA.

About the Executive Producer and Editor

Peter McDonnell is a creator and writer of The New York Times bestseller Evil Has a Name, as well as Call Me God, selected as one of Audible’s Top 10 Listens of 2019, Shootout, Brooklyn North, The Riddle of Emmon Bodfish, A Devil in the Valley, and After the Fall. He’s a co-executive producer of the Emmy-nominated Netflix documentary series Pandemic and the NBC documentary series The Forgotten West Memphis Three. Peter runs the audio department at XG Productions. He’s a graduate of New York University’s Tisch School of the Arts and has an MFA from Oregon State University, where he also taught writing. A native of St. Louis, he lives in Los Angeles.
This has been Solving the Black Dahlia.
Created, written, and narrated by Douglas Laux
Executive Produced by Douglas Laux, Heather J. Miller, and Peter McDonnell
Edited by, Heather J. Miller, Peter McDonnell, and Andrea Bruce
Assistant Producer: Sydney Sidell
Dialogue Editing, Sound Design, Mixed, and Mastered by Matt Gurgol
Executive Producers for XG Productions: Spencer Gordon and Peter Clemente
Produced by XG Productions
True Crime
Show more Show less

What makes my story about this infamous case different, and what do I hope listeners will take away from it?
"It was never my intention to solve the Black Dahlia murder. Instead, my initial interest in the case was based upon the fact that in the 75 years since the murder occurred, so many people have come forward, confident that they had solved it. My story is distinctly different because mine is an investigation of all the previous theories and based on one simple premise: only one of the theories can be right, or else they are all wrong. This led me on an exhaustive, eight-year deep-dive into the case. I researched everything from Black Dahlia autopsy reports to suspect handwriting samples. I conducted interviews with the leading experts on the murder and explored our cultural fascination with the horrific crime. I hope listeners will appreciate the level of research that went into my investigation, but mainly I hope they remember that the Black Dahlia was a young woman who had a life, certainly had a future, and had a real name: Elizabeth Short." – Douglas Laux, writer of Solving the Black Dahlia
ORIGINALS

True-crime stories examine the ills of our society. Here are four of the best true-crime audiobooks to learn from.
ARTICLE

What listeners say about Solving the Black Dahlia

Excellent in all Ways

This was an excellent investigation and analysis of this Cold Case as well as how we must at times be satisfied with knowing only as much as we do.

Fantastic and well written Narrator did an excellent job as well as the author. Sure did keep your interest through each episode. I’m going to listen to it again!

Save your time! The only new info was total speculation. I couldn't roll my eyes enough.. I feel bad for the deceased surgeon and his family, who are now targeted with literally no valid evidence. So many weak and lame conclusions!!

I think this podcast could have been longer and more detailed. It seems that the author was a caught in between a pissing contest between two theories. And to the outsider… it seems that there was a childish journalist who got his ego bruised and posited no evidence for his theories other than … Hodel’s an idiot.

Now, I don’t subscribe that Hodel is Beth’s killer, I do find it hard that *spoiler name withheld* did it either while suffering from his condition… they would have lost the skills required to accomplish the murder and setup of the secondary scene when dealing with Encephalomalacia. And the lack of any evidence (from this podcast) of sexual deviance and the nature of the crime just doesn’t jive.

It may be an issue of editing. But it seemed like a lot was left out that may have supported this conclusion. I’m not convinced…

The first five episodes are nicely done and present the case from several angles. However, the last episode and the final “reveal” of who the host suspects murdered Elizabeth Short was SUCH a let-down. I literally yelled out loud, “What?!” about 5 times throughout the episode. I won’t spoil it, but they literally pull this guy’s name out of a hat, and the reasons they give for his presumed guilt are actually laughable. He lived nearby and he was a surgeon. Oh and by the way, he had dementia but was still “highly skilled” and able to pull off the most macabrely detailed murder and dismemberment of all time. It doesn’t add up and the evidence they present for their conclusion is paper thin. If I was that guy’s family, I’d be pissed.

All the criticism of prior reviewers are valid here. The author makes a big deal of his bona fides (CIA agent) yet never mentions that Steve Hodel was both a police officer and homicide detective for the LAPD. Don't you think this would have relevant to this podcast as it would have given him access to both evidence and contacts with investigators of the case (verbal evidence between colleagues rather than in the written report). Very suspicious that he conviently omits this yet he trusts the theory of a newspaper editor; columists being known for running with less than the full deck of facts. In any case, having served on a grand jury I know that if either of the two suspects would have been presented to a grand jury they probably would have been indicted (only need 14/23 for true bill and case to proceed to trial). The theory being let the case be adjudicated and let the jury decide on guilt. I'm certain that both suspects would have been found not guilty (or better not proven).

Finally listen to the podcast then read the book by Steve Hodel as I did.

Could have been condensed to 2 episodes

We hear an awful lot of references to Laux’s history as a CIA guy, and so very much repeated information. Maybe some listeners need to be told something a dozen times. This is a great story and some interesting information padded to within an inch of its life. There is about an hours’ worth of insight in these episodes. It’s like the podcast version of the meeting that could have been an email. That said, look at the stars I’m giving it! It’s because the new insight is really interesting, for people who care about the Elizabeth Short story.

The blurb for this podcast states 'For eight years he leverages his CIA skillset to try and solve the Black Dahlia murder. Now, he believes he has.' If that means that the writer has read some books and now talks about them, that is correct, but if you imagine that Lax has done any original research of his own, you will be sadly disappointed.
It starts with him meeting Steve Hodel and completely falling for Hodel's belief that his father murdered Elizabeth Short. It then moves on to Lax meeting Larry Harnisch, who has another theory, and thoroughly dislikes Steve Hodel. Lax now believes Harnisch and doesn't believe Hodel. Harnisch knows who killed Elizabeth, but won't say.
In the last episode Harnisch reveals the name of who he think did the awful crime, a surgeon who lived near where Elizabeth's body was found. Absolutely no proof, just a few coincidences, it feels as though this mans name has been picked out of a hat. The family descendants of this man are now living with the cloud of suspicion that their heretofore loving father and grandfather was in fact the most evil sadistic perverted murderer of all time!!!
Avoid this podcast, I wish I had.

This was such a waste of time. Anyone who watched the BBC Arena James Ellroy doc 'Feast of Death' will have heard this other name mentioned back in in 2001.

Are they a likely suspect? Absolutely - but it isn't new and, with zero evidence provided, it certainly isn't solving anything.