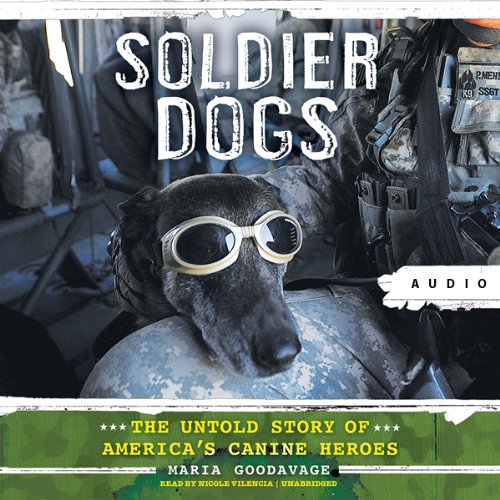 By: Maria Goodavage
Narrated by: Nicole Vilencia
Try for $0.00

A leading dog-blogger offers a tour of military working dogs’ extraordinary training, heroic accomplishments, and the lasting impact they have on those who work with them.

People all over the world have been riveted by the story of Cairo, the Belgian Malinois who was a part of the Navy SEAL team that led the raid on Osama bin Laden’s compound. A dog’s natural intelligence, physical abilities, and pure loyalty contribute more to our military efforts than ever before. You don’t have to be a dog lover to be fascinated by the idea that a dog - the cousin of that furry guy begging for scraps under your table - could be one of the heroes who helped execute the most vital and high-tech military mission of the new millennium.

Now Maria Goodavage, editor and featured writer for one of the world’s most widely read dog blogs, tells heartwarming stories of modern soldier dogs and the amazing bonds that develop between them and their handlers. Beyond tales of training, operations, retirement, and adoption into the families of fallen soldiers, Goodavage talks to leading dog-cognition experts about why dogs like nothing more than to be on a mission with a handler they trust, no matter how deadly the IEDs they are sniffing out, nor how far they must parachute or rappel from aircraft into enemy territory.

"Military working dogs live for love and praise from their handlers," says Ron Aiello, president of the United States War Dogs Association and a former marine scout-dog handler. "The work is all a big game, and then they get that pet, that praise. They would do anything for their handler." This is an unprecedented window into the world of these adventurous, loving warriors.

Maria Goodavage, a former reporter for USA Today and the San Francisco Chronicle, is the editor and featured writer for one of the most widely read dog blogs in the world: For the Love of Dog. She is also the author of The Dog Lover’s Companion to California and The Dog Lover’s Companion to the San Francisco Bay Area. She co-produced and wrote an award-winning children's video about animals, starring the voice of Ed Asner.

Includes a bonus PDF with photographs.

"Maria has proven her passion for the subject of military dogs with many emotionally engaging stories about these dedicated canines and the people who share their lives. She is the perfect combination of news reporter and dog lover." (Tracie Hotchner, author of  The Dog Bible)
" Soldier Dogs is a fascinating book about the valiant things that military dogs do as told through the words of the soldiers who fight beside them. It also shows you how military service dogs are created, told through the words of the trainers and scientists who know the process. It is written in an easy and entertaining style and will acquaint you with dozens of canine heroes ranging from Stubby, who fought in WWI, to Cairo, who was a member of the raiding party that took down Osama Bin Laden. It is a great read for anyone who appreciates dogs and heroes." (Stanley Coren, author of  The Intelligence of Dogs)

What listeners say about Soldier Dogs

Sometimes too analytical, technical and redundant. But loved the heroics and the bonding stories. Decent listen/read.

This is a great book that tells many stories of handlers and their best friends as they work through dangerous terrain in war zones across the world.

The story of the marine who was killed in action along with his dog. Very sad.

Thank a solider whenever you see them for their sacrifice. They are dying so we can be safe at home.

I enjoyed this audio book, although I am thinking that with all the acronyms used, it may be more conducive to read in print format. I liked that there were different sections, with different areas of focus. It was interesting to learn more about the Military Working Dog program, but I was also glad that there was a section devoted to the stories of the dogs and their handlers. This was an interesting book and will appeal to those interested in animals and the military working dog program; a huge thank you to those in the military (both 2 and 4 legged) who put their lives on the line to protect us.

Would you listen to Soldier Dogs again? Why?

Yes I will. Very fascinating book with a lot to absorb.

Gunny. He has a great compassion for the dogs and is so instrumental in preparing these handler/dog teams for war. The dogs are trained motivationally instead of with compulsion and he has proven that motivation is - by far - the best method to train these high drive working dogs.

Which character – as performed by Nicole Vilencia – was your favorite?

See above. Nicole Vilencia did a great job as the narrator.

And Don't Call Them "Equipment"

This book also touched on "The Robbie Law" which allows for our canine heros that have saved countless American lives, to come home and be offered for adoption at the end of their careers and live out their lives with the dignity and love that they so deserve.

Detailed and heart wrenching at times.

This book covers everything for WW I up to the UBL raid. It has fantastic historical details as well as great characters. You can find yourself attaching yourself to your dogs, only to find their fates to not be so pleasant. If you don't mind shedding a tear every few chapters, you should find this to be a VERY enjoyable listen.

What other book might you compare Soldier Dogs to and why?

Not bad, but nothing ground breaking.

A tear here and there.

Dogs are just amazing, they can save our lives, our soldiers lives and help our country!
Even the ones that didn't quite, "make the grade", are in great demand and are still very useful. Police departments, fire departments, our dear handicapped friends. Thanks to the dogs and their trainers for all you have done to make these dogs, Soldier Dogs.

Enjoyed the story and very well done. The MWD is a truely awesome program and these Warriors are 100% man's best friend.

Rex and Ingram because they had a special bond.

What does Nicole Vilencia bring to the story that you wouldn’t experience if you just read the book?

I would be honored to adopt a retire dog ANYTIME. Semper Fi

Maria Goodavage, like many people, became seriously interested in Military Working Dogs after hearing about Cairo, the dog who was part of the mission to get Osama bin Laden. She thought that surely this wouldn't be a hard subject to investigate; after all, these are dogs, not not nuclear weapons or stealth fighters.

It turns out that this is a very challenging area to investigate, precisely because these are &quot;just dogs&quot; and dogs who are in many ways quite secret. In many ways, in many places, they officially don't exist. This includes in veterinarian's offices, where the normal paperwork simply does not occur. She had her work cut out for her just getting in touch with the people who could tell her about these dogs and introduce her to their handlers.

But in the process, she met some wonderful people and dogs.

Goodavage was already very knowledgeable about dogs, but the lives of military working dogs and their handlers are very different from anything that happens in civilian life. Many of us have very close bonds with our dogs, especially when they are for us working dogs: service dogs, farm dogs, search and rescue dogs being just a few examples.

Handlers of military working dogs, though, depend on these dogs for their lives. Yet at the same time, they also live with the knowledge that these dogs who save their lives and the lives of other soldiers serving along side them may be killed while doing so. It's hard to beat the bond that comes from that.

Goodavage looks at the modern history of soldier dogs, their selection; their training; the washouts who are often fantastic dogs, just not for this work; the training of their handlers; the relationships between them; the work they do; the retirement of the soldier dogs who survive their service.

She also looks at the complete lack of any official recognition for what these dogs do and the lives they save by doing it. Legally, officially, a military work dog is not a dog soldier, but a piece of equipment, no different than a rifle.

Overall, it's a fascinating look at the dogs and at the people who train them and work with them.

What did you love best about Soldier Dogs?

The 'inside' information about these amazing animals, their handlers, and their mission.

What other book might you compare Soldier Dogs to and why?

None that I am familiar with...

Have you listened to any of Nicole Vilencia’s other performances before? How does this one compare?

No I have not.

Don't miss this opportunity to learn about these amazing animals.

What did you love best about Soldier Dogs?

The book was so informative regarding the training of both the dogs and handlers without being too technical or boring.

All the heart-warming stories about the bonds formed between dog and handler were riveting.

The manner in which the author detailed many acts of bravery (both by man and dog) was matter-of-fact and not too sappy. There was little need to be sappy - I cried my way through most of the book. I'd recommend this book to anyone.