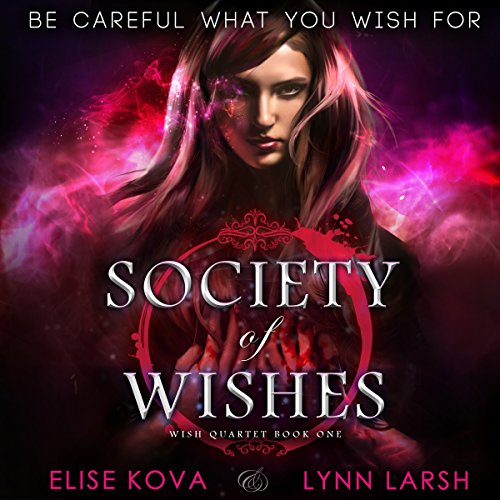 Josephina Espinosa makes her living as a hacker-for-hire in the Lone Star Republic, a remnant of the fractured USA. That is, until the day she and her best friend are gunned down in a government raid.

With her dying breath, Jo uses magical lore passed down from her grandmother to summon a wish-granter. Her wish? To save her friend's life. Except wishes have costs, and for Jo, the price is the erasure of her entire mortal existence.

Now, as the most recent addition to the mysterious Society of Wishes, Jo must form a new "life" alongside the seven other members, one of which being her savior himself. Living as an occupant of the Society's lavish mansion should be quite the perk, but while it is furnished with everything its inhabitants could possibly need, it lacks one thing - freedom.

Her otherworldly identity crisis takes a backseat, however, when Jo learns that the friend she sacrificed everything for is headed down the same path to ruin. Jumping in head-first, Jo uses her newfound magical abilities to protect him, only to realize that the ripples of her actions have far-reaching consequences. When the Society's aloof leader Snow decides to give her a taste of his own ancient magic, Jo discovers that there are threads woven into the tapestry of her new reality that reach far beyond the wishes she is now required to grant. Ones that, if tugged on, could mean the unraveling of her existence itself.

What listeners say about Society of Wishes

This book has a very unique story line, in all the many books I have read, I have never come across anything similar. I really liked the blending of modern hacking and magic set in the future- in a world very different from our own, yet close enough to be a very plausible possibility. The narrator did good job voicing the multiple accents of the many characters, though at times I would find it hard to figure out who exactly was speaking when multiple characters were together. There were so many questions this story touched on answering, but by the end I still felt like many of them were unexplained. It ended rather suddenly – right when I thought I was about ready to get some real answers! All in all an enjoyable listen.

Society of Wishes was an interesting listen. I have never read or listened to anything by these authors before, so I was excited to give it a shot. The story line was very interesting. It just didn’t pull me like I had hoped. It won’t stope from listening to these authors in the future.

Wishes and the future

This was a very interesting book and take on wishes. The characters are from all sorts of different times and I definitely want to learn more about them and what brought them to the society. Snow can be very harsh but there are glimpses of something more and hopefully in the later books this will get explored more. The main character has a lot to learn about herself, her powers, and the society along with the people in it. This was a fun unique twist on granting wishes and how it is done. I liked the main character Jo a lot. She had a lot of sass and fought for what she thought was right. I am looking forward to seeing how she shakes up the society with her magic. This has a good amount of action and explanation for things since Jo is trying to figure everything out. I had fun listening to this book. I look forward to what will happen in the next books especially with that ending.

I love Kova's Air Awakens series, and I wanted to love this, too but - it just didn't click with me. I did enjoy it and it was a unique and well-told story, so I would recommend for fantasy readers looking for something different. The characters were interesting, but I didn't love them like I love AA/VV characters. I did listen to this one, and the narrator was okay but not exceptional, so maybe I need to actually read this and continue with the series to get a better feel for it. Sometimes I love something in print, and not so much on audio, and vice versa. One thing is for sure, I adore this cover!