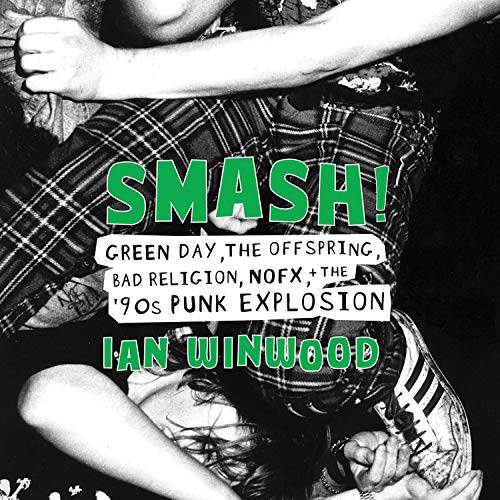 Two decades after the Sex Pistols and the Ramones birthed punk music into the world, their artistic heirs burst onto the scene and changed the genre forever. While the punk originators remained underground favorites and were slow burns commercially, their heirs shattered commercial expectations for the genre. In 1994, Green Day and The Offspring each released their third albums, and the results were astounding. Green Day's Dookie went on to sell more than 15 million copies and The Offspring's Smash remains the all-time best-selling album released on an independent label. The times had changed, and so had the music.

While many books, articles, and documentaries focus on the rise of punk in the '70s, few spend any substantial time on its resurgence in the '90s. Smash! will be the first to do so, detailing the circumstances surrounding the shift in '90s music culture away from grunge and legitimizing what many first-generation punks regard as post-punk, new wave, and generally anything but true punk music.

With astounding access to all the key players of the time, including members of Green Day, The Offspring, NOFX, Rancid, Bad Religion, Social Distortion, and many others, renowned music writer Ian Winwood at last gives this significant, substantive, and compelling story its due. Punk rock bands were never truly successful or indeed truly famous, and that was that - until it wasn't. Smash! is the story of how the underdogs finally won and forever altered the landscape of mainstream music.

What listeners say about Smash!

Pretty sure they couldn't find a less punk narrator if they tried. This guy even pronounced punk in drublic wrong.

This was hard to listen to. The narrator is odd for this content. If you've listened to "Hepatitis Bathtub" and know how Jello Biafra read those chapters imagine that voice but without the delightful Jelloness.
As a fan of the bands, it's awesome to hear the stories of the bands I love being formed and growing. Definitely worth listening to.

I found this book very interesting. Having lived during this time and listened to these bands. It’s was great taking a peak behind the curtains. 2 things I didn’t like were:
1 - the narration. The narrator sounds very robotic. I could be wrong but he sounds like he has no idea what and who he’s talking about. At point mispronouncing names. No good!
2 - I feel the book takes a focus on Green Day more than anything. Specially towards the end. Almost feels like the author ran out of things to talk about when it came to the other bands.
I still enjoyed the book. How some of these records came to be and some of the performances that changed how the world looked at Punk Rock

Very interesting and a lot of fun.

Really enjoyed this book. Came of age with this music. When the author speaks of kids at 1994 Lollapalooza arriving early for Green Day that was me and my friend at the Miami date. Great book, lots of info and interesting insight to the bands and the time.

It’s hard to criticize someone that’s reading to me being that I chose to not take the time to sit and read it myself. I have had a lot of books read to me over the years I’ve been an audible customer. Never have I felt that the human chosen to read a story was this wrong for the part. It’s not that they were bad in any way but just the wrong choice for a story about punk rock. Still a wonderful book and I plan to read it myself soon.

whoever thought it was a great idea to use this guy as the "reader" sucks! Love the book but it was hard sometimes to stay with it just cause of the monoton sound of the guys voice...

A pretty good history lesson that focuses a bit too heavily on Green Day. I'd much rather hear about the other stuff that was going on in the 90's. Not a fan of the reader. He makes the author sound like a pompous asshole along with the subjects. It was nails on a chalkboard to hear him repeatedly mispronounce "punk in droooblic". Overall, pretty interesting, though. The best parts were about Gilman St. Go read the Bad Religion book for the Other stuff.

i like it. im a fan of all of these bands, so for me, it was very nostalgic and cool to know about somethings from behind the scenes.

the author, a former Kerrang! editor, knows his stuff and tells a fantastic tale.

that said, I wish he'd given more due to the descendants, the original pop punk band, and the group most of the acts in this book are aping.

also, the narrator's attempt to dramatize the authors dense, lyrical prose is bit over the top and becomes annoying after a while.

other than that, if green day, bad religion, the offspring, and the like are your thing, this book is a must-read (or must listen, as it were).

Loved it. Found out a lot about some of my favorite albums. If you loved this year's punk rock music it is highly recommended!

You're not punk and I'm telling everyone.

Fantastic book. It could have been twice the length and I still would have been left wanting more. Punk rock was the soundtrack to my youth and continues to be the soundtrack of my mid-to-late thirties. There could not have been a better group of bands to be exposed to as a fed up and isolated youth in the mid 90s. Up the punks.

I don’t think I could be more a perfect member of the desired target audience for this collection of stories. I have a playlist of about 10 or 12 band, I’ve had this same playlist since I was 18. It hasn’t changed and it won’t change. This book gives fascinating insight into the lives of the people who were there and who shaped the lives of 4 of the bands from my playlist. Not as in deep on the history of NOFX but we have their own book for that, this is really the story of green day, Bad Religion the offspring and Epitaph records. Well worth your time if you as invested in to any or all of these 3 bands. Of your not, I’d say it was still worth a go, but I’m guessing it was my love for the above that got me through the 12 hours or so in a little under 5 days.

Its really very boring. Written like a university report dryly citing all the references and listing out song titles and lyrics with the writers name. With a heavy bias towards Green Day in that regard listing pretty much all the songs on dookie, insomniac and American idiot. I ended up skipping through sections as it's just mind knumbingly boring.

Its very focused on bad religion, the offspring, green day, lookout and epitaph records so don't get this if you want to know about the scene at the time (or to hear interesting anecdotes or stories as there aren't many).

Also contrary to the style of citations and dry facts it's interspersed with random opinions- bosstones are great, the exploited are rubbish and Conan O'Brien is the best us TV host of all time.

As much a biography on Westbeach Recorders in Hollywood as the bands mentioned in the title, this look at the 90s mainstream punk explosion is truly addictive. If you have even a little interest and working knowledge of the bands included, this exploration provides a great insight and chronology of their collective journeys to the big time.

Interestingly, it turns out I pretty much went to Westbeach Recorders without realising it as part of my honeymoon in 2018. The building now houses the Museum of Death and another recording studio on Hollywood Boulevard.

I honestly did not want this to end. It really spoke to the nostalgic music geek in me, and my love for this genre. Any chance of a sequel covering the pop-punk and emo explosion of the early to mid 2000s?

It’s like listening to a robot.
Shame as I really wanted to like it as it’s my era.
It’s how it goes with audio books, so much is in the narration.
Hey-go, on to the next.

I just loved this!

Loved! Great to hear the hardwork and dedication which created great music, and the party which went along with it!

I listened to this after the listening to the NOFX audiobook and reading Greg Graffin's Anarchy Evolution. It complements both well and fills in more information.