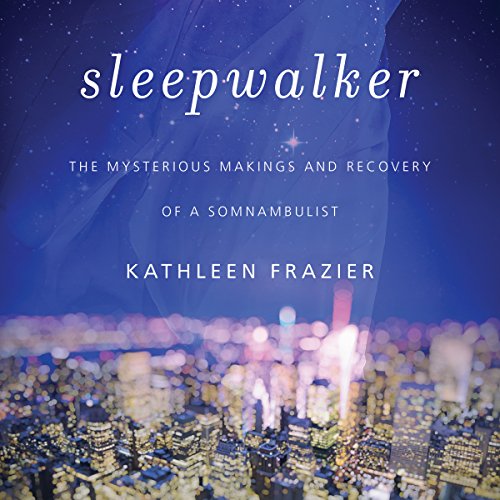 "I came to in the middle of it, like waking inside a horror movie, silent scream and all. Eyes wide open. I was standing at an open window, staring at the dizzying curve of Riverside Drive, five floors below. I'd stopped, somehow, poised, about to jump."

Growing up the good girl in an Irish American family full of drinkers and terrible sleepers, Kathleen Frazier was 12 when her seemingly innocent sleepwalking turned dangerous. Over the next few years, she was a popular A+ student by day, the star of her high school musical. At night she both longed for and dreaded sleep.

Frazier moved to Manhattan in the 1980s, hoping for a life in the theater but getting a run of sleepwalking performances instead. Efforts to abate her malady with drinking failed miserably. She became promiscuous, looking for nighttime companionship. Could a bed partner save her from flinging herself down a flight of stairs or out an open window? Exhaustion stalked her, and rest and love were seemingly out of reach.

This is the journey Frazier illuminates in her intimate memoir. While highlighting her quest to beat her sleep terrors and insomnia, this is ultimately a story of health, hope, and redemption.

What listeners say about Sleepwalker

Wonderful coming out story of a strong woman

Absolutely! There are many people who I am going to recommend this book to! It is a great book with an inner story that many people can relate to even if the situation is not the same!

What was one of the most memorable moments of Sleepwalker?

I found many..... but I love that Mark came at the right time in her life and is a man of few words but of the right actions.

Kudos to Kathleen Frazier for finding the strength in life and the courage to bare her soul for all of us to learn to find the courage within us!