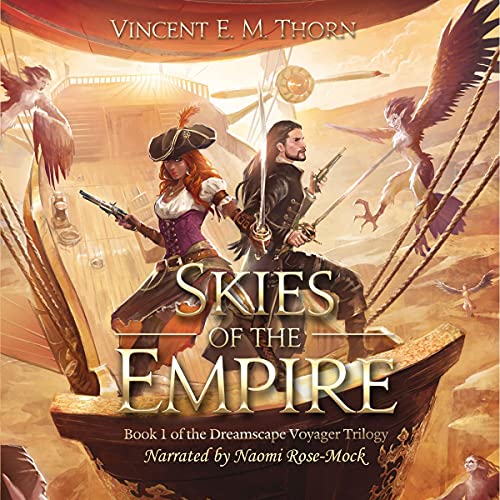 Skies of the Empire

In the Skies of the Empire, there are only two things more terrifying than dragons: the attentions of the gods and the machinations of the fae. Airship pilot Cassidy Durant finds herself entangled with both when a faerie named Hymn saves her life in exchange for protection against unknown enemies. This complicates her simple life of cargo trading, since affiliating with the fae is a death sentence in the Empire.

Meanwhile, reluctant mercenary Zayne Balthine is tasked by his employer, a devout worshiper of the Desert Goddess, to break into the Imperial Palace. It's not his first suicide mission, but this time, things are different. That he'll die should he fail is nothing new. But if he succeeds, he will be responsible for unfathomable death and devastation.

Skies of the Empire is a high-fantasy adventure set in a steampunk environment. It is the debut novel by Vincent E. M. Thorn.

What listeners say about Skies of the Empire

I already loved this book, and the narrator for the audiobook added a new, soothing dimension. Very impressed, can’t wait for book 2!