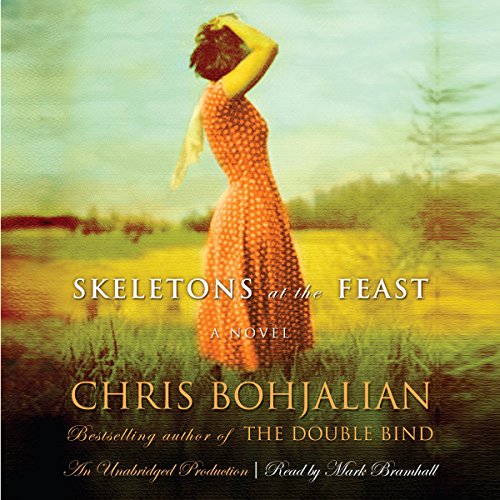 Skeletons at the Feast

By: Chris Bohjalian
Narrated by: Mark Bramhall
Try for $0.00

In January 1945, in the waning months of World War II, a small group of people begin the longest journey of their lives: an attempt to cross the remnants of the Third Reich, from Warsaw to the Rhine if necessary, to reach the British and American lines.

Among the group is 18-year-old Anna Emmerich, the daughter of Prussian aristocrats. There is her lover, Callum Finella, a 20-year-old Scottish prisoner of war who was brought from the stalag to her family's farm as forced labor. And there is a 26-year-old Wehrmacht corporal, who the pair know as Manfred - who is, in reality, Uri Singer, a Jew from Germany who managed to escape a train bound for Auschwitz.

As they work their way west, they encounter a countryside ravaged by war. Their flight will test both Anna's and Callum's love, as well as their friendship with Manfred - assuming any of them even survive.

Perhaps not since The English Patient has a novel so deftly captured both the power and poignancy of romance and the terror and tragedy of war. Skillfully portraying the flesh and blood of history, Chris Bohjalian has crafted a rich tapestry that puts a face on one of the 20th century's greatest tragedies - while creating, perhaps, a masterpiece that will haunt listeners for generations.

"Careful research and an unflinching eye...Bohjalian's well-chosen descriptions capture the anguish of a tragic era and the dehumanizing desolation wrought by war." ( Publisher's Weekly)

What listeners say about Skeletons at the Feast

The is a wonderful, heart wrenching story about the victims of Hitler’s war. Mark Bramhall provided exceptional narration for an extremely well crafted book.

I did enjoy this narrator . He was excellent. Very believable story.

A View of WWII from a Different Perspective

The first 15 minutes were a tough sell, but then, I became totally engaged by this story.

It is one in which the perspectives of Nazism and the war are told from the perception of German citizens who were both fighting the war and fleeing from it. The story told of Germans who supported the Reich, who questioned the Reich and who fought against the Reich.

It is told from the perspective of a prisoner of war from Scotland, an escaped Jew who survived by adopting the identity of fallen German and Russian soldiers, and from a Jewish woman held in the German work camps.

I found it required careful listening as the author changed voices with little notice and little or no segues.That is not to fault the book, it is just the author's MO.

This is a good story; an abundance of violence and death; a bit of romance; and in the end, a realistic story about the true nature of war -- any war.

Grabs your attention from the beginning

I was reluctant to read another book about World War Two but this one caught me up immediately. I still shake my head on the horrors that the Jews went through and how the country supported Hitler and all the atrocities he was responsible for. This book will touch your heart with the determination of a few who were willing to stand alone to fight and to protect.

A beautifully told gut wrenching story. So hard to take in at times but I was transported. Very well written and the audio/narrator was superb.

I enjoyed this book about a German family and all the endure at the end of WW2 as they attempt to flee to the West and the safety of the Allied forces.
Moved along well and it kept enthralled and inspired by the story.

I love this author. His characters really come to life, and his subject matter is diverse. This one was a little harder to follow in the beginning, but well worth struggling to remember who is who. I will be reading all this author's novels!

His novels are diverse in subject with unpredictable storylines. Always riveting. While part about the British POW seems implausible it was still a beautiful story.
I wasn't fond of the accents used to differentiate the characters, but that's the only negative I can report.

a Haunting Tableau; a Loving Tribute.

This book offers a glimpse into the lives of 3 young adults whose lives converge during the latter part of WWII in Germany. Anna is a German girl raised by a powerful and wealthy man. She falls in love with Callum who is a Scottish POW. They all befriend Uri, a Jewish German who has escaped the camps by posing as German and Russian soldiers. Their lives intersect and they share their travels towards freedom. The topic matter has been explored often and remains rich and full of stories that provoke both thought and emotion. Mr Bohjalian writes the story with ease, allowing his reader to create the picture of place and the setting of mood. It is a good book. It is not anywhere near as good as The Winds of War and/or War and Remembrance by Herman Wouk, but it is good.

Loved this story! It is graphic and overwhelmingly sad at times, but isn't that what war is?