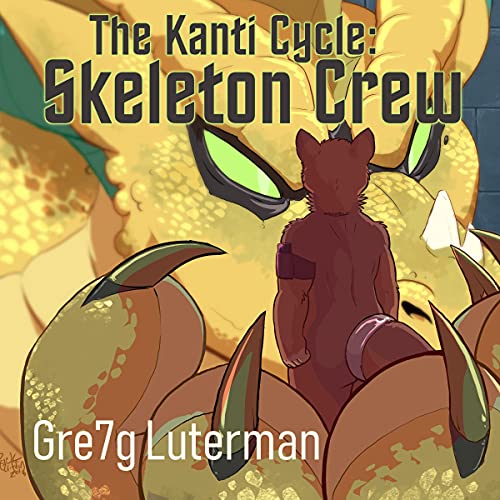 By: Gre7g Luterman
Narrated by: Piers Ryman
Try for $0.00

A well-placed kick into Kanti’s stomach dropped him back to the deck, grasping his gut and gasping for breath.

“If you ever utter the phrase ‘skeleton crew’ again, I promise that I will find out,” Captain Ateri said calmly.

“And when I do, I will rip chunks of you out with my bare paws...and toss them into the recycler one by one...until all that remains of you...is your blood in my fur...and your screams in my ears.”

But the captain is the least of Kanti’s concerns. A huge monster named Commissioner Sarsuk thinks the crew of the White Flower II is out of control, and that executing Kanti publicly - a slow, messy execution - is the perfect recipe for getting the ship back under his clawed thumb. Now Kanti is living in terror - a slave raised believing himself free, a criminal even before his birth. Everyone thinks he’s someone he isn’t: a playboy reduced to working at the dump, a spiteful son trying to make amends, and perhaps even an excuse to recycle every last officer, crewman, and cub on board. The next few days are going to take this unlikely hero and the rest of the crew on a wild ride to the brink of mutiny, isolated deep in space, some 1500 light years from home.

What listeners say about Skeleton Crew

This is super good guys

I may be a bit biased but I like listening to Ryman's performance bring the story to life. Kanti is a very down-to-earth protagonist; he's not stupid, but he is caught in the middle of a lie he can't simply resolve by confessing to the right person. Already this makes it leagues better than stories where you're constantly yelling at the character "just tell the truth already!" You know why he can't. That's very critical to building sympathy.

This book was originally a standalone title but then Gre7g did the foolish thing of making not just one but many more sequels, meaning there is just SO MUCH geroo to invest your time in.

This story illustrates the best way to start and expand upon a great universe. The protagonist is interesting and far from all-powerful, rather the opposite. Piers Ryman delivers a powerful, gripping performance. I'd recommend this story to anybody that loves a twisty-turny story of breaking rules, both in the genre and in the story itself.

If so, then look no further. I was invested with Kanti almost from the start, and I was worried about what would happen to him as the events began to unfold.

As for the narrator; while I'm not confident in my own judgement on the performance of other people, I will say that all the character's voices were easy to distinguish from one other. I particularly like the voices that the narrator did for Captain Ateri and Commissioner Sarsuk.

I would indeed recommend this for anyone who enjoy the science fiction genre.

some books make you feel like you're on the outside looking in. this brings you right into it. You are part of it. I alternately laughed, cried, suffered from anxiety, and enjoyed it very very much.
everybody that reads this, I strongly urge you to follow along, and come to the next adventure!

Pro narraton of the start of a compelling saga

Kanti Cycle was my introduction to the rich universe shared by Gre7G Luterman and Rick Griffin, and I don't think it could have left a better first impression. I have read the book before enjoying the audiobook, and it loses nothing, and gains some surprises and clever foreshadowing on a second pass, especially with the lower-effort of having it read to me!

The worldbuilding is exquisite, and the generational gateship/explorer White Flower II is truly a character on its own. As a fairly basic introduction to the world and characters, Skeleton Crew treads some familiar ground, but still manages to throw in twists and plot beats that all but demand a reaction, even knowing that it was coming. Gre7g excels at character inter-relationships and building a story that keeps the intensity at a high level. The quieter moments are a welcome and necessary respite from the terrible difficulties faced by the protagonists. Balancing an epic setting with a very personal struggle is hard, and Gre7g seems to consistently deliver in this respect. Kanti starts as a pitiable character, with next to nothing, and is forced to make some very hard decisions as events that can change the lives of everyone on the ship spiral around him. Everyone has believable and consistent reasons for doing what they do, no unforced idiot balls in this story!
Skeleton Crew is fairly short for a novel, but in this case it just means that little is wasted. The pacing is tight and pulls you along. When I first read this novel, I stayed up way too late to finish it in one sitting.

Piers Ryman's narration is exceptional and was for me reminiscent of Peter Kenny's performances of Banks' Culture novels, quite the high bar! Piers is a talented reader, and Luterman and Griffin have done well to retain him for their continued works in this setting. Though some of the accents are not what I imagined (Sarsuk especially) they are all fitting and Piers is easy to listen to, and he is good at lending the proper weight to his narration. He's obviously a fan of the series, and I'm sure that helps!

Could not stop listening!!

I found myself listening to this all the way through in nearly one sitting! the performance is fantastic and the story sucks you in making you eager for more!!

I love this universe and when I found out there was more stories in it after reading Rick Griffin's first two novels I eagerly dived into this story and I was not disappointed.

Piers Ryman once again has a commanding performance bringing all the characters to life. often when I read stories myself I will mix characters up but the audiobook really makes it easy and that is in no small part due to Mr. Ryman.

I will be picking up the next book soon!

claw biting on the edge of my tail suspense

why does the dragon have to be the bad guy?

not what I was looking for

Amazing story right from the get go

Skeleton crew is the first audio book I have from the amazing Gre7g Luterman. I am not unfamiliar with his works, however I had not read this book before listening to this wonderful dictation.

The story had me from the first few paragraphs, so much so that I listened to the first chapter a couple of times just to make sure I had heard it correctly. It absolutely gripped me that any story should start with something so somber, and from that point on I was hooked.

The character descriptions and narrations let you really get a feel for those in the story, as I feel any good story should. You find yourself immersed in their worlds and their daily lives, which makes so much of the story so heart wrenching to me. You don’t necessarily need to know everything about the world and the species as they are well described throughout, meaning that you can listen to this as a stand alone book, or alongside others within the series.

The narration is really easy to listen to, clear and well spoken. As someone who has ADHD and struggles to focus on reading a book the whole way through, it’s been a delight to hear this from start to finish. I found it very easy to remain focused and enjoyed every minute.

I highly recommend Skeleton Crew if you love sci-fi and drama, and truly believe you’ll be as hooked as I was.

Skeleton Crew was recommended to me as one of the first furry books I ever heard of, and... I'm not disappointed. I really soaked the universe. Book itself is great, and in this audiobook narrator performance is really on high level. Great audiobook to listen on the bed, with closed eyes!

This story had me on the edge of my seat, bravo. More, more!

I loved the hints. I adored the description. The flow, the hint dropping, the references to other books. I loved it and need to read this again.

Great work, both to the Author and the Narrator. I almost can't wait for the next one!