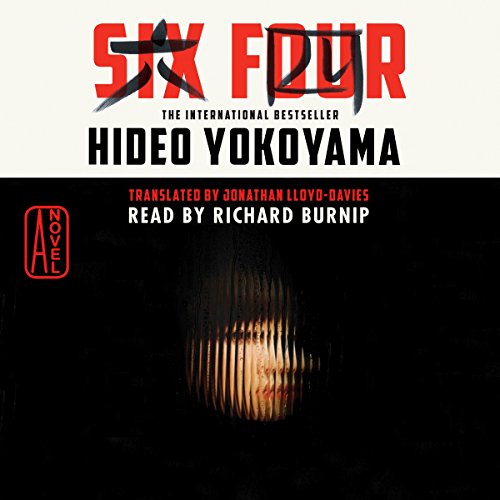 By: Hideo Yokoyama
Narrated by: Richard Burnip
Try for $0.00

The nightmare no parent could endure. The case no detective could solve. The twist no listener could predict.

What listeners say about Six Four

What did you love best about Six Four?

This is a mystery that does not follow the typical who-done-it formula. Hideo Yokoyama's Japanese perspective keeps the story intriguing through multiple plot turns and fascinating, contemplative characters.

Make up your mind, narrator!

It's not enough that the Japanese names are mispronounced, but the reader can't decide which mispronunciation to choose and so varies wildly. Plus, that stupid male ready trick of reading all women in the same high, weak voice--only men get distinct voices. The story's fascinating (so much interior politics to crime), but the terrible narration makes me wish I'd chosen something else.

Like a previous reviewer, I had so looked forward to this book and had preordered it by a couple of months. However...first of all, the narrator was SO s-l-o-w that it made it practically impossible to listen to. He left huge self-indulgent gaps between sentences, so it was just about acceptable when sped up to 1.25 time, and actually even OK at 1.50.
Also, his characterisations of various characters were impossible to tell one from another.
I have given it four hours of my best attention - a fair trial I think. It may be better to read it - in fact it MUST be as it has such great reviews in book form. Some of the difficulty was certainly mine, in that unfamiliar Japanese names are not so memorable as more familiar European/American names - so it was hard to follow who was who.
But the story was laborious, did not grab me at all - so I am returning it.
I may well see if its different in print - as the narrator is such an integral part of audio books - and this man was pretty horrific.

What made the experience of listening to Six Four the most enjoyable?

The listening experience was nearly ruined by having someone with a British accent narrate a Japanese story. He can't even pronounce Japanese names correctly.

I will never buy another book narrated by Richard Burnip

The book is too long. Yokoyama's exploration of the innards of the Japanese police bureaucracy gets boring after a couple hours. He needs an editor--cut to the chase.

Made it to the last page hoping something would happen. Very dissapointed. This book is predominantly a drama about press relations and interdepartmental tension, subjects I would never be interested in reading. I don't understand the raving reviews. The narration was horrible too. I can't get those hours of my life back.

complex, really enjoyable. so many layers. enjoyed the japanese customs and the numerous relationships. solid writing and ending. rich - subtle

Not your typical detective story.

I was surprised to see negative reviews of this novel and I think their disappointment stems from what they thought the story would be, as opposed to what it actually is, and that should not reflect on the book itself. If you are looking for car chases and shoot-outs or thought you found a Japanese version of "Harry Bosch" then you will be disappointed so maybe look up "Jack Reacher" or find a old episode of "Criminal Minds" to watch.

On the other hand, if you go into it with a open mind, understand that you are reading about a different culture where the dynamics between the police and the press are completely different than you are accustomed to, then you will find a fascinating story with plenty of twist and turns and a ending you won't expect.

A good story, not easily figured out. Great narration with good pronunciation of the Japanese words.

Difficult to know what to make of this book..

Yes, there was a mystery.
Yes, it was quite a twist..
But was it worth ploughing through 25 hours of what was predominantly a guide to Japan’s regional police force?
...or a perpetual struggle to remember the multiple characters’ names, many of which sounded identical to one another?