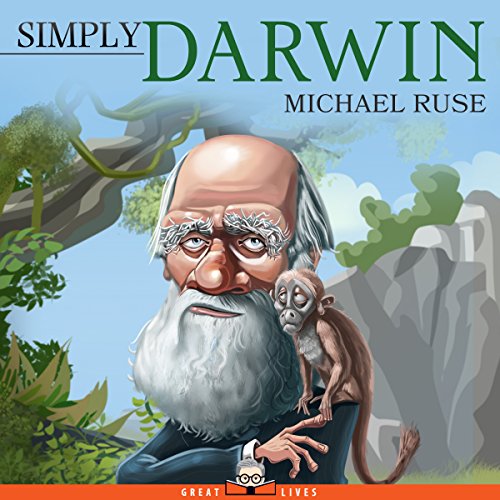 By: Michael Ruse
Narrated by: Hugh Holman
Try for $0.00

Simply Darwin tells the story of Charles Robert Darwin (1809 - 1882) and his theory of evolution through natural selection. On one level, the book portrays a dedicated scientist who, through careful observation and brilliant insight, became convinced that organisms were the end product of a long, slow, and natural process of development. On another level, it is an account of a cataclysmic change in our ideas about ourselves - a conceptual upheaval that continues to generate aftershocks - and heated debates - to this day.

In Simply Darwin, author Michael Ruse puts Darwin and his ideas in their proper context, clearly showing that, while the father of evolutionary biology was a true trailblazer, he was no rebel. He was simply following an evidentiary trail that led to an inevitable conclusion about the origin of species and natural selection. Eventually, as Darwin and his fellow scientists began to apply his ideas to humans, long-held notions about the nature and origins of religion, morality, race, sexuality, and much more, were called into question. Then, as now, some of us embraced these provocative ideas, while others reacted with horror and disbelief.

What listeners say about Simply Darwin

Would you consider the audio edition of Simply Darwin to be better than the print version?

Didn't read the print version but listening to this was a great way to pass the time while working.

There was a lot in here about Darwin that I didn't know and much that I have forgotten. It was a nice look at his life and what was going on at the time.

It was interesting getting into his life and seeing things from a different perspective. There was a lot of great information here.

I actually enjoyed this book more than I expected and was happy I got the chance to listen to it. Not only was the book good but the narration was as well. I was voluntarily provided this free review copy audiobook by the author, narrator, or publisher.

I received a free copy of this audiobook from the author / narrator / publisher in exchange for an unbiased review.

To get people interested about learning science and lives of scientists, we need those content to be presented in easily digestible format / style. Present it like a text book and people will get bored and leave. From the cover art of the book, I was expecting that the book will take a informal and ELI5 approach for the subject and I will enjoy learning more about Darwin. Instead, the book feels much more like a text book / research paper for grad students. The narration makes it worse. The narrator kept reading the book line by line in a monotone voice, without showing / inducing any enthusiasm about the topic at hand. I couldn't sit through it for long and had to abandon it.

The information is well set out and the writing makes to easy to understand even if you know little about Darwin or his work.

The narration is well done although I would have preferred more of a difference in the voice used when the book was quoting someone or changing POV.

This was a good read.I learned things about Darwin that I never knew before.His family history and childhood were especially interesting.Hugh Hoffman did a fine job as narrator.I was provided this book free by the narrator, author or publisher.

What made the experience of listening to Simply Darwin the most enjoyable?

The narration combined with the unique look inside Darwin. I enjoyed it.

The Foundation for a Journey into Darwin

What made the experience of listening to Simply Darwin the most enjoyable?

Having attending Christian schools for most of my education, I was never taught Darwin. Unbelievably and inexplicably, this scientist was just a small blurb in my science books. This book however is a fundamental read for anyone who wants to learn about the real Darwin and his accomplishments in science. This is a necessary read, especially for anyone interested in science. There are so many misconceptions of Darwin, when taught in a religious education, but this book dispels any anti-religious myths.

Which character – as performed by Hugh Holman – was your favorite?

Hugh Holman is a delightful narrator with a great British accent. I really enjoyed his narration. It was upbeat and I was able to easily follow the details of the book.

While this is a brief audiobook that can be listened to in one to two sittings, no details remain outstanding from Darwin’s scientific theories and his personal life.

Good summary of Darwin and his Theories

Would you try another book from Michael Ruse and/or Hugh Holman?

If you’ve listened to books by Michael Ruse before, how does this one compare?

This is my first one. I found the general "story" of this book interesting but did find myself drifting off after a while. I like science but this is too detailed for me. I did enjoy the tid bits about Darwin and his personal life.
Good book, I'm typically a non-fiction kind of reader. This one was short and concise.

I enjoyed his accent, English or British. Even though I'm American it was still easy to understand him.

Could you see Simply Darwin being made into a movie or a TV series? Who should the stars be?

Maybe a documentary on a science channel. Not mainstream TV or cinema.

This was less a biography and more an intellectual examination of Darwin, which is much different to the other 'Simply...' biographies. It felt pretty good have a break from that style, but this was a very dry intellectual biography. I learnt a lot more about Darwin that I had simply never even thought to ask, but the book was hard to get through.

This audiobook is rendered unapproachable by the dreadfully inadequate narrating skills of Hugh Holman, I am sorry to say.
The whole text is read in one dull and uniform unbroken line that gives no clues as to when he is reading the main text, a quote or a foot page note. It is often difficult to tell where a sentence ends and another one begins!
Unacceptable.

This is a very good book, it is full of interesting facts about this exceptional scientist and the effect that he had, and continues to have, on the understanding of the world we live in.

It was well read and I would be happy to listen to this narrator on a different book.

As it was so full of facts and little stories, I think that this will be a book which I will listen to again