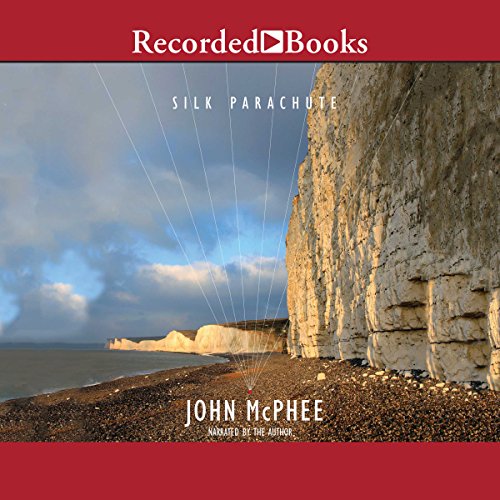 The brief, brilliant essay "Silk Parachute", which first appeared in The New Yorker over a decade ago, has become John McPhee's most anthologized piece of writing. In the nine other pieces here - highly varied in length and theme - McPhee ranges with his characteristic humor and intensity through lacrosse, long-exposure view-camera photography, the weird foods he has sometimes been served in the course of his reportorial travels, a US Open golf championship, and a season in Europe "on the chalk" from the downs and sea cliffs of England to the Maas valley in the Netherlands and the champagne country of northern France.

Some of the pieces are wholly personal. In luminous recollections of his early years, for example, he goes on outings with his mother, deliberately overturns canoes in a learning process at a summer camp, and germinates a future book while riding on a jump seat to away games as a basketball player. But each piece - on whatever theme - contains somewhere a personal aspect in which McPhee suggests why he was attracted to write about the subject, and each opens like a silk parachute, lofted skyward and suddenly blossoming with color and form.

What listeners say about Silk Parachute

It's a landscape with the aspect of memory."

"It's a landscape with the aspect of memory."
- Laura McPhee or Virginia Beahan talking about the landscape around Trenton, NJ (I'm not sure who is being quoted, it might be a slight narrative allusion to the title and subject of this essay, and McPhee is playing with the reader a bit) in Under the Cloth by John McPhee

I bought this book almost 8 years ago. I'm not sure why I didn't read it in 2010. It was shelved next to the remaining 8-9 McPhee books I haven't read and not forgotten, just posponed. Well, I jumped back into reading McPhee again (I can't sip McPhee, he is best consumed in large quantities until exhausted). I was sent a copy of his most recent book of essays: The Patch. And it got me rolling again. I want to finish, catch-up, complete McPhee before he is 90 (March 8, 2021). So I need to get to work again.

The book consists of several (six?) essays that appeared in the New Yorker (no surprise to ANYONE the least bit familiar with either the New Yorker or McPhee). It also begins and ends with short essays and also includes a couple essays not found outside this book (that I can find):

1. "Silk Parachute" - A short, beautiful introductory essay about his mother and childhood.
2. "Season on the Chalk" - New Yorker 3/12/2007
3. "Swimming with Canoes" - New Yorker 8/10/1998
4. "Warming the Jump Seat" - A short essay about writing about Mr. Boyden, headmaster of Deerfield Academy, profiled in two articles in the New Yorker in 1966, and eventually, put into a book published by FSG titled: The Headmaster: Frank L. Boyden of Deerfield
5. "Spin Right and Shoot Left" - New Yorker - 3/23/2009
6. "Under the Cloth - An essay about the dual photography of McPhee's daughter Laura (I just ordered a couple of her books on Amazon) and Virginia Beahan (I ordered their book too). I was happy to see that Ariel Katz, in her wonderful essay "Photography and Language in John McPhee's "Under the Cloth" came away with the same impression I did earlier and above in my lead quote by Laura or Virginia:
The way McPhee structures his essay mirrors his subject matter: much of the dialogue in the essay isn’t attributed to either photographer, giving their words the effect of having emerged, at times, as a chorus from inside the camera with which they work. Although they’re making visual art, language, as McPhee observes, is key to their collaboration. He writes, 'Neither one is hesitant with words. In the span of their work together, words by the tens of thousands, in every conceivable category, have been muffled by the dark cloth.
7. "My Life List" - New Yorker 9/3/2007
8. "Checkpoints - New Yorker 2/9/2009
9. "Rip Van Golfer" - New Yorker 8/6/2007
10. Nowheres - A touching and brief concluding essay on the beauty of New Jersy, McPhee's home.

Anyway, you can read 6/10 of essays and probably 8/10 of the text directly from the New Yorker if you don't run out of free views (I did just checking for this essay) or you can subscribe (I will next year) or you can just buy the damn book from FSG. It really was a delight on a day of delights (Thanksgiving). I am grateful, every year, for John McPhee.

PS. The ONLY REASON I'm giving the audible performance one star is NOT because of McPhee. It is because the audible version between chapters 11 and 12, cuts off about 4 of the final pages of "Checkpoints"

all over the place

I usually love John McPhee, but I didn't "get" this one. it was all over the place, with no thread - not even a parachute cord - running through it. He is not the most pleasant speaker I've ever heard, either. This is the only book of his that I didn't love, and I've read most of them.

Not the McPhee I enjoy

Parts of this book I found so tedious that I fast forwarded to the next chapter. The part on Lacrosse
with endless lists of teams and other minutia was a chore to get through. At odd intervals the author
drifts into seemingly unrelated material without
any cohesive structure.