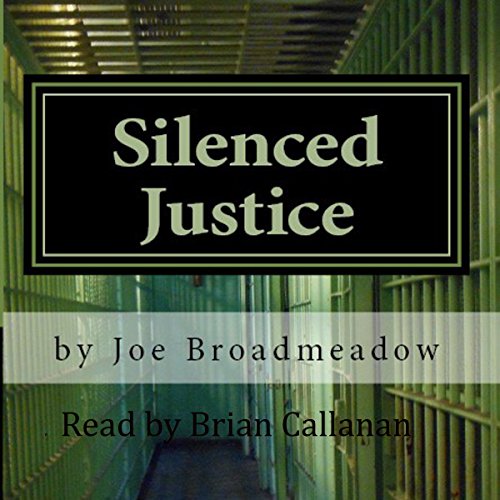 By: Joe Broadmeadow
Narrated by: Brian Callanan
Try for $0.00

Lieutenant Josh Williams is back in this latest thriller from Joe Broadmeadow, Silenced Justice...

When his former boss, retired Lieutenant Chris Hamlin, asks him to reopen an old case, Josh uncovers the shocking truth behind an innocent man's death in prison.

In 1972, Darnell Grey, accused of a series of rapes and a homicide, is beaten to death in the prison while awaiting trial. As a black man accused of crimes against white women, a justice system intent on vengeance uses all its resources to secure his imprisonment. Evidence of his innocence is ignored, witnesses manipulated, and the truth locked away, putting him into a racially volatile prison system.

With his death, his memory and the case against him fades into the past. Determined to bring the matter to light, the deeper Josh looks into the case, the more dangerous it becomes for him and those he loves. Discovering a darker, more sinister conspiracy in play, Josh risks everything to uncover the truth - a truth that unveils hollowness and corruption at the very core of government and our Justice System.

What listeners say about Silenced Justice

This was an amazing book! Kept me on the edge of my seat. Listened to it every day during my commute. The narrator was awesome. I'm now going to look for other books by the same author.

What made the experience of listening to Silenced Justice the most enjoyable?

Brian Callanan did an outstanding job with the accents! There were a lot characters in this story and keeping them straight would have been more difficult if the narrator had not done such great work differentiating them.

Josh was my favorite character because he operates with integrity but is willing use nontraditional means to reach his objectives. He is likable and I enjoyed how he is driven by doing the right thing.

Have you listened to any of Brian Callanan’s other performances before? How does this one compare?

No- but hope to in the future.

I hesitate to answer because I do not want to provide spoilers- but Josh's interactions with the victims were particulary poignant.

A complex and tense thriller

Silenced Justice. .
A complex plot and strong characters make this a gripping audiobook.
Corrupt politicians, Russian gangsters and mob involvement vs the police and FBI, what more do you need in a book.
Well written and researched and woven into a tale of intrigue. Very entertaining.
Narration is excellent and keeps you turning pages.
I received a free copy of this audio book at my own request and voluntarily leave this review. .

I received a gifted copy of this audiobook and am happy to be able to provide this review. It has been some time since I have listened to a good suspense mystery book. in this story there are a lot of characters to keep track of along with plenty of plot twists and turns.
I have not heard any books from Brian Callanan yet but was pleasantly surprised how he was able to keep me involved and engaged in the story by his narration. Even with so many characters, Brian's narration helped me keep track of everyone without struggling to follow along. This may have been his first narration, I couldn't tell even if it was. I am impressed with how well he controlled the story, characters and tone. Definitely a 5 star performance to me.

I picked this book because of the narrator. I've listened to a lot of books Narrated by Brian Callanan over the last year or so, this is one of his early books and I could hear the difference. That said the it's still great narration, all the things that make him so good now show in this book. The character voices are easy to tell apart and are consistent through the whole book. The delivery is smooth and flows, and finally the emotions of the characters come through in their voices.

The book itself is also excellent. At first it seemed like this would be a simple story of clearing the name of a man falsely accused, but with every chapter more and more complexities came to light.

The characters are well written, they come across as real flawed people. Like all of us their motivations are complex and they don't always make great choices, but this is what makes them great characters.

I love how it ends, some bits were resolved but as in real life there was plenty still left to be discovered, it left me wanting a second book.

Where does Silenced Justice rank among all the audiobooks you’ve listened to so far?

Book was very interesting and kept my interest. Narration added a whole new dimension and made characters come to life. Narrator did a great job and made the whole experience extremely enjoyable! It was like watching a play in my mind!

What other book might you compare Silenced Justice to and why?

It reminded me of somewhat of Earl Emerson and Michael Saunders.

Have you listened to any of Brian Callanan’s other performances before? How does this one compare?

This was my first experience with Brian Callanan's performance, but I must say it was excellent! I look forward to listening to more books narrated by Brian!

Not really, I just enjoyed the whole story.

Several twists that will delight any thriller fan

Josh Williams starts investigating an old case, requested by his former boss Chris Hamlin. A black man, accused of raping some white woman, and killing one of them, was sent to prison and killed there. Josh's investigations will demonstrate that witnesses had been manipulated and the truth tergiversed. During these investigations, the Russian mafia tries to kill Josh's wife, and they will realize that this case is deeper and darker than what they thought, having very powerful people involved in covering the truth.

This is an action packed story with several twists that will delight any thriller fan. I do not know if reading the previous book of the series is necessary here. I guess it is not since the story stands well on its own, but maybe we could get a better picture of the characters having read both books. It was an exciting listen, in which it was difficult to imagine how they good guys were going to tackle the bad guys since they had so much power. It was quite an interesting book that I would recommend if you like this genre.

Even though it was a very interesting book, there were some aspects that would not grant it five starts. The character development was almost inexistent, the characters were flat and some of the conversations quite forced. The frivolous banter between Josh and his wife felt completely artificial like they were just acquaintances. Also, the information was delivered mostly in dialogues and monologs, which felt forced too.

Brian Callanan's performance was okay. The narration and dialogues were very clearly delivered, but all characters sounded more or less the same. It is true that this is not an easy book to narrate since there were many characters, but I find it more pleasant when the narrator makes an effort in trying to make the characters sound different. That paired with the poor character development prevented me from fully enjoying this book.

I would recommend this book to any thriller fan, but if you are not into this genre you may skip it since this book does not particularly stand among others.

I couldn't follow the story because the narrator sounded like he was reading line by line. the only thing I noticed was I didn't hear the pages turning. Terrible to listen to.