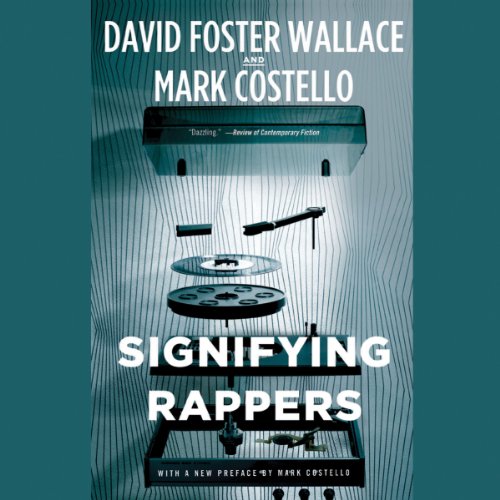 Finally back in print and now in audio - David Foster Wallace and Mark Costello's exuberant exploration of rap music and culture.

Living together in Cambridge in 1989, David Foster Wallace and longtime friend Mark Costello discovered that they shared "an uncomfortable, somewhat furtive, and distinctively white enthusiasm for a certain music called rap/hip-hop." The book they wrote together, set against the legendary Boston music scene, mapped the bipolarities of rap and pop, rebellion and acceptance, glitz and gangsterdom. Signifying Rappers issued a fan's challenge to the giants of rock writing, Greil Marcus, Robert Palmer, and Lester Bangs: Could the new street beats of 1989 set us free, as rock had always promised?

Available again at last, Signifying Rappers is a rare record of a city and a summer by two great thinkers, writers, and friends. With a new foreword by Mark Costello on his experience writing with David Foster Wallace, this reissue cannot be missed.

What listeners say about Signifying Rappers

My relationship with RAP started out a little funky. I remember hearing Ice-T's "Girls, L.G.B.N.A.F." on a 9th-grade biology trip to Southern Utah. Sony Walkman shared in the back of the bird bus. A bunch of white, prep-school kids from subburban Utah with no tangible idea what the ghetto, urban or underpriviliged was like experimenting with early RAP excess to pubescent abandon.

Fast-forward a year: I'm living in Izmir, Turkey, getting a letter mailed 1/2 around the world from a friend and girl referencing said trip with L.G.B.N.A.F. stamped all throughout. Letter is discovered and read by Father. Father demands to know what L.G.B.N.A.F. means. There is no way in HELL to explain to Father, while driving in Asia Minor, what that ICE-T song meant in Moab or what it means in the here and now. The result of this failed explanation is I can never hear Journey's Greatest Hits (the abumn I was listening to in the car as my father was interrogating me) without thinking of Ice-T (strange mental ebbs and flows). Now fast-forward two decades: watching my wife watch Ice-T on Law & Order: SVU. It is all just a little trippy -- weird convergences of RAP, Journey, Turkey, and crap television all fighting for meaning in my memory. The world IS indeed a DFW essay.

But, like my diet Dr Pepper left outside overnight or a green pear eaten too soon, this book hints at (DFW's) later genius without quite delivering the thing you want. It over-promises and under-delivers on the what, why, and wherefores of RAP. It is almost exactly what you would expect an overwritten book about rap put together by a young, tired genius who hasn't yet found his literary voice/mojo and his college roommate to be like.

The weirdest, and most ironic part of the whole audiobook experience was the end when the narrator, on behalf of Hachette Audio, declares that "no part of the audio recording can be reproduced, copied, used, etc. without prior permission from yadda yadda" A funky ending to a book on an art form of theft, samples, and reproduction. David Foster Wallace would have loved the irony, would have stolen the warning, and would have riffed and rapped about it in a follow-up essay.

Anyway, it was genius in parts, smug in parts, dated in many many sections, angry and alienated through-out, and still -- despite all its flaws -- it moved me and was worth the money. And, as Lil Wayne never gets tired of telling me "only money make me move".