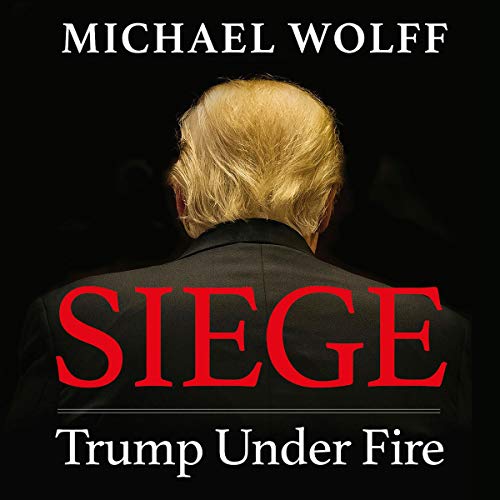 Michael Wolff, author of the bombshell best seller Fire and Fury, once again takes us inside the Trump presidency to reveal a White House under siege.

With Fire and Fury, Michael Wolff defined the first phase of the Trump administration; now, in Siege, he has written an equally essential and explosive book about a presidency that is under fire from almost every side. A stunningly fresh narrative that begins just as Trump’s second year as president is getting underway and ends with the delivery of the Mueller report, Siege reveals an administration that is perpetually beleaguered by investigations and a president who is increasingly volatile, erratic and exposed.

Michael Wolff is the author of Fire and Fury, the number one best seller that for the first time told the inside story of the Trump White House. He has received numerous awards for his work, including two National Magazine Awards. The author of seven previous books, he has been a regular columnist for Vanity Fair, New York, the Hollywood Reporter, British GQ and other magazines and newspapers. He lives in Manhattan and has four children.

What listeners say about Siege

A paen to Bannon

It’s all about how smart Bannon was in anticipating Trump or how he was advising in the background. All of Trump’s actions are awful but you then hear about how great Bannon was and how well he understood Trump. The author’s only source seem to be Bannon so while Trump is awful, you wonder who is the book written about and who is worse - Trump or the man who put him there - according to him - Bannon

As in Wolff’s previous book and similar ones about the Trump administration, this has a mind-boggling overview of rampant corruption, incompetence and malfeasance, to an almost numbing degree. On almost every page there’s one example of behaviour that would end any other presidency. For that reason, it’s fascinating and compulsive, but also deeply worrying and depressing.

Hairless and airless . The yellow peril

I great insight into the personality of the sitting POTUS , Donald Trump. As the story is still ongoing it looks like we might get a third insight

Welcome to Trumpland. They do things differently there. Very differently.
Michael Wolff brings the same tone of energised gossip he brought to "Fire and Fury." The tone of someone grabbing you by the arm and saying "It's worse than you thought. Wait 'til you hear what I know..."
His sources range from a range of unnamed White House insiders and friends of Trump, who received various of his late night, frenzied and paranoid calls, as well as his chief source from the last book, big splotchy fascist Steve Bannon.
And here the book shares the same irritant of the former. It gives Bannon far more kudos and political credibility than he deserves. Of a political maverick fighting for the working class, and betrayed by his former masters, as opposed to the damaging fascist he really is. But that aside, this is binge listen material. Going through the main chapters of Trump's presidency after the first book, it takes in various of Trump's domestic and foreign policy debacles. He appals his military by pulling out of Syria. He appals the world with the Putin/Helinski Summit where Putin visibly owns him. And Wolff is always clear about how much of dangerous lunatic Trump is. Much more dangerous as a cornered animal, as this book portrays him to be. Under the 'siege' of the title, by a disillusioned base and right wing media as he fails to build his wall, by angry, betrayed and insulted colleagues and former colleagues, and by Mueller and his investigation into Trump's affairs. It ends with Mueller's catastrophic failure to hold Trump to account.
I look forward to the next book (I presume there will be one) and how it will portray Trump's response to the pandemic, 'black lives matter' movement, and his efforts to overturn the American election.

A really good follow up to Fire and Fury. Interesting to get an inside baseball look st how some key moments in history played out. And, disappointing that the Muller investigation findings are reduced to just an epilogue. But, perhaps the author is saving that for his third book on Trump? Worth mentioning that the voice over artist was really great - making me laugh out loud numerous times with his impressions.

Nowhere near as incisive as fire and fury, and the only real source is bannon. It avoids being his propaganda just about.

Definitely an opportunistic sequel. Whereas fire and fury made a companion piece to fear (5*) this is unnecessary, although enjoyable.

This book is enjoyable but it feels like reading magazine articles. No overarching narrative. Sometimes I had to force myself to focus.

An insisive account of the Trump White House. The chaotic and unpredictable behaviour of Trump.

Maybe half a book

Parts of it were either copy and pasted or re-hashed. Having purchased both books on Audible I was a little disappointed in this one. Wolfe just appears to be the loathsome Bannon's ghost writer at times. That said, I tend to listen 2/3 times and this is based on my first listen. Helped make painting and watching the walls dry go quicker!

The guy reading it, assume he also did the first book too, was again great.

Another uncomfortable delve into Trumpland

A must for anyone who enjoyed Fire and Fury, this picks up largely where Wolff left off in the chaos of Trump’s White House. Perhaps less jaw droppingly revealing as the first, it nonetheless peels back the toupee of respectability the office of President still affords Trump to bring the anecdotes and experiences of those working closely with the administration and their attempts to contain and control. It delivers with pace and drive and captures the relentless shifting sands which Wolff seems convinced will eventually consume Trump.

I read the author's "Fire & Fury" and was curious about this one after seeing the author's interview on MSNBC. In my opinion, "Siege" is a better literary construct than his first installment of the Trump's presidency. Wolf goes deeper, his description are more elaborated, and he presents Trump and his entourage with more understanding of the political structure in Washington than in the other book. I would offer a word a caution though; when Wolf talks about policies or Trump's decisions about foreign countries such as China or Russia, it is to be taken with the view that there is another side to the coin. Overall, I enjoyed his book and was even surprised at some of the information contained in it. I recommend this book.

Fire and Fury was great, this book is really great. A tale of dysfunctional mayhem by a gaggle of misfits and miscreants, it mortifies constantly in a "how could they....and how could they get away with it?" manner. Terrific writing, superbly narrated it was a real life horror story that I couldn't put down.

Inside the Trump Whitehouse.

This is almost a fly on the wall look at Trump's true character and modus operandi, or lack of same. I had to limit my listening to this Audio Book. Listen and be both increulous and afraid. Plus the narrator, Holter Graham, really brings the characters to life.

Quite amusing in parts.

This book only suffers from being a little out date because so much has happened since Siege was published. It is very revealing and unexpectedly laugh out loud in parts. it is well read and moves along at a cracking pace.

I have thoroughly enjoyed this second book in the 'series'... am awaiting book three. Insiteful listening.