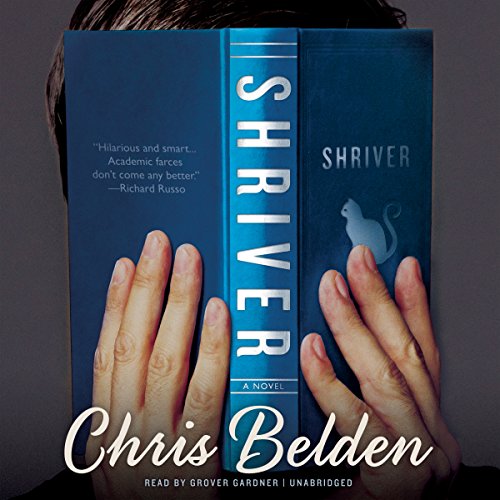 By: Chris Belden
Narrated by: Grover Gardner
Try for $0.00

Mistaken for a famous but reclusive author of the same name, lonely Shriver attends a writers' conference at a small Midwestern liberal arts college. Completely unfamiliar with the novel he supposedly wrote and utterly unprepared for the magnitude of the reputation that precedes him, Shriver is feted, fawned over, and featured at stuffy literary panels and barely manages to play it cool. Things quickly go awry when one of the other guest authors suddenly disappears, and Shriver becomes a prime suspect in the investigation.

Amid eager fans, Shriver must contend with a persistent police detective, a pesky journalist determined to unearth his past, and a mysterious and possibly dangerous stalker who seems to know his secret. But most vexing of all, Shriver has fallen in love with the conference organizer, who believes he's someone else. When the "real" Shriver (or is he?) arrives to claim his place among the literati, the conference - and Shriver's world - threaten to unravel.

Filled with witty dialogue, hilarious antics, and a cast of bizarre and endearing characters, Shriver is at once a touching love story, a surreal examination of identity, and an affectionate tribute to the power of writing.

What listeners say about Shriver

I'm a fan of Chris Belden's writing and his music. So happy this awesome novel is not only published, but on its way to becoming a movie (probably, as things Hollywood are never guaranteed until they're "in the can").
I listened to this straight through on two loooong bike rides.