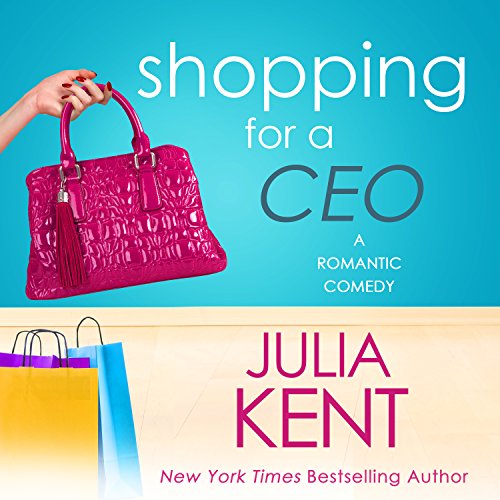 Shopping for a CEO

By: Julia Kent
Narrated by: Amy McFadden
Try for $0.00

I'm thrilled to be the maid of honor in my friend's wedding, but the best man, Andrew McCormick, is a chauvinistic pig with a god complex. And I can't stop kissing him in closets.

He's the brother of the groom and the CEO of my biggest mystery shopping account, but suddenly he's refusing to be in the wedding. He won't talk about it. Won't see reason.

He's such a man. And he still won't stop kissing me in random closets.

I'm a fixer. That's what I do. I can fix anything if given the chance. But when the game is fixed, there's only so much I can do.

The ball's in his court now.

What listeners say about Shopping for a CEO

Easiest book I've listened to in ages. Momzilla is seriously planning the wedding of the century. Even inviting the President of the United States. She kept me in stitches and everyone in the book angry at all times. The author's sarcastic humor is perfect for this series. Can't wait to start the next book.

Shopping for a CEO

I can't get enough of this series. Julia Kent keeps you laughing. The ending of this one was priceless. I think it's the first time Marie is at a loss.

It's nice to see Andrew and Amanda finally start acting on their feelings and moving forward in their relationship. This one also hints at future matches.... I can't wait to see how that plays out.

Deeper than the rest

So this story line was a bit different than the writing I was typically use to. There was less humor and way more heart. I have truly fallen for Amanda!!! She is strong and caring and just an amazing person. She doesn't let her fear of anything hold her back. She is relatable and reliable! She made this story for me. Andrew, at times, was a jerk! He allowed fear to hold him back from life. A fear worth having but he used it as a crutch, which I disapprove of! I love the ending and how their HEA! Can't wait until the next book!

Wonderful! I laughed so much

Love this book, and the whole series

I've been in love with this series since Shannon got her hand stuck in the toilet in the first book.

The narrator was perfect. The way I imagined the characters would sound is exactly how she reads. She really brought this book to life.

Certain books just need to be read more than once

Would you listen to Shopping for a CEO again? Why?

Yes, I would listen to Shopping for a CEO again. Julia Kent's books are filled with two of my favorite things; romance & humor. I have started listening to humorous books I have previously read because I love to listen to books when I am doing something else like walking to work or doing chores.

Amanda is one of my favorite characters because she has such a positive attitude even though she drives a Turdmobile, has to date strange dog lovers for work and can't stop thinking about her best friend's future brother in law.

Which character – as performed by Amy McFadden – was your favorite?

This whole series and basically all of Julia's books constantly makes me laugh out loud. The mystery shopping experiences & the ridiculousness of this wedding are just rich with belly busting humor.

Julia Kent did it again! Bravo! I can't remember a book that made me laugh out loud so much. The characters are great and the story is entertaining.
The narrator is excellent. She actually made the sound effects! This is a fantastic listen.

I literally laugh my ass off. Seeing Amanda's mind is so interesting and hilarious I gave up and just gave Amanda a pat in her shoulders for a job well done. I looooove how she fits into JACOBE family even though she and Shannon aren't related at all. Honestly she's like the soul sister of Shannon, I even wish I had this kind of friendship that has no bounds, LITERALLY 🤣 cause PRIVACY is never the motto of JACOBE family household. Can't wait for the next book! 💖💙😍

Such a Fun Series!

I love this series! The characters are fun and the dialogues keep me laughing for most of this book! Momzilla is throwing the wedding of the Century! Her craziness has no bounds. Amanda is the maid of honor and Andrew continues to drive her mad.

Narration is excellent and brings the story to life. I love Amy's voices. She really is the icing on the cake! I love her intonation and emotions.

I have enjoyed every book in this fun series. I love the characters and Shannon continues to amuse me with her laid back manner in regards to her mom. Letting her mom plan everything is totally insane!!! She is definitely going to regret this!

I'm looking forward to the next book!

The narration was good, a couple of the characters were dodgy but that's forgivable, especially in a 'comedic' book like this. The story itself, not the greatest. It was a bit blah which is a shame as it had such great reviews.

In terms of my preferences I personally wouldn't recommend, although if you're into more fluffy melodramatic reads (think a pg 50 shades in terms of the way it's written, dialogue, character dynamics) you might like this.

Over the top weddings oh my!

Absolutely adore this book. Completely hilarious and such a brilliant narration. I'm now seeing tartan everywhere! Such a touching history with the lead characters while chaos reigns in the background.