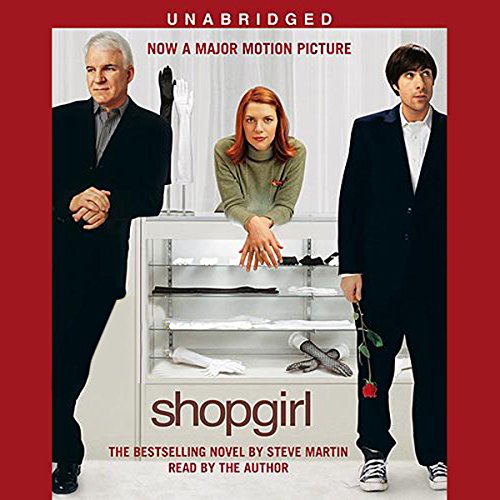 One of the country's most acclaimed and beloved entertainers, Steve Martin has written a novella that is unexpectedly perceptive about relationships and life. Martin is profoundly wise when it comes to the inner workings of the human heart.

Mirabelle is the "shopgirl" of the title, a young woman, beautiful in a wallflowerish kind of way, who works behind the glove counter at Neiman Marcus "Selling things that nobody buys anymore..."

Slightly lost but not off-kilter, very shy, Mirabelle charms because of all that she is not: not glamorous, not aggressive, not self-aggrandizing. Still there is something about her that is irresistible.

Mirabelle captures the attention of Ray Porter, a wealthy businessman almost twice her age. As they tentatively embark on a relationship, they both struggle to decipher the language of love - with consequences that are both comic and heartbreaking. Filled with the kind of witty, discerning observations that have brought Martin critical success, Shopgirl is a work of disarming tenderness.

"Martin's elegant, bleak, desolatingly sad first novella is in every sense his most serious work to date." (The New York Times Book Review)

What listeners say about Shopgirl

This was my first audible book to listen to and I am now hooked. I loved this book so much that I bought the bound version for 11 of my friends and relatives for Christmas, however I believe they may not enjoy it as much as I since they won't be fortunate enought to "hear" the author read it. I would love to see more from Steve Martin, as writer or narrator.

The only negative is that the book seems to end in the middle of Mirabelle's of a sub-plot. It was such a strange spot to stop that I thought my player was broken our hadn't downloaded the entire book. If I had been "reading" the book I would have anticipated how close I was to the end, but with audio you never really know, and this book did not end well. Still I enjoyed it a great deal, perhaps there will be a sequeal, to pick up where this one strangely stops.

Martin is such a keen observer...

Having majored in Comparative Literature at a well-known university, I admit to being something of a literary snob. I had uncertain expectations for this novella by an actor. I was very pleasantly surprised and impressed by this well-paced, original story. First of all, the narrative itself is an inventive twist on a conventional love triangle. In fact, it is not really a love triangle at all, but rather the simultaneous story of three intersecting lovers. Secondly, Mr. Martin enriches the tale by weaving in all sorts of precise and humorous observations on daily life, depression, relationships, love, ambition, inertia, and human eccentricities. Some reviewers have said Mr. Martin did not do a good job at expressing and developing the female point of view. Quite the contrary, I was amazed at how well he seemed to be able to crawl into the female psyche. All the characters, with the possible exception of Lisa, were interesting, well-rounded, and real. I cared about them. I don't understand how people can say this book was depressing. Yes, there are moments of despair, but the end is so uplifting (without being trite and "Hollywoodesque") and the story is all about people lifting themselves up, learning to take control of their lives. How is that depressing? Plus some of the laugh-out-loud funny moments (like Lisa's capture of 'Ray') really balance the sadder moments in the book. I also felt that Mr. Martin was an excellent reader (and I have listened to hundreds of audio books). My only complaint is that the last quarter of the book read a bit like an epilogue. It was as if Mr. Martin was on a deadline or trying to meet a page limit, so he summarized the action in a sort of play-by-play rather than really writing the end of the book. I would have loved to read more of his wonderful prose, injected as it was with clever turns of phrase, interesting bon mots, and believable streams of consciousness.

This is a surprisingly charming and insightful book. Martin's writing is crisp, and his characters seem true and real. He's also an excellent reader.

I know that I should have done a better job of managing my expectations when I settled into my car to listen to Steve Martin's "Shopgirl." Over the years, I have admired how the author has managed to keep a strong following while at the same time continuing to push into more "mature" projects. That said, I found myself a bit disappointed by the story of Mirabelle the Shopgirl.

Mirabelle is the saleswoman at the counter of the glove department of Nieman Marcus. Mirabelle is a small-town girl fighting depression and loneliness in Los Angeles. She is in her mid-twenties, feeling her way through her post-college awkwardness in a city that doesn't know what to do with a shy artist from Vermont.

I actually read Steve MArtin's second novella before this and it is it's own author's recommendation. This story is so well told and insightful that you are sure you know these characters have in fact been these characters at different periods in your life. I loved it so much that I worked out longer than usual so as not to have to push the "off" button on my IPOD.

This book is amazing. I read a review which stated women don't think that way...and that person was right. All women don't. I did when I was the age of the main character. I found it very easy to believe in all of the characters of this book and lose myself in the story. It was beautiful.

And Steve Martin is truly the only person who could read the book. More authors should read their own unabridged works (ahem...Alan Alda, I'm looking at you).

So real it hurts.

For anybody who has ever had an intergenerational relationship or tried to think they could love a woman incompletely, this story will have the ring of truth. I have had these feelings and committed the same mistakes in my life with similar results. I loved this book so much. Last night, I saw the movie with the same title. It was just as good as the book and cast SO well. But, I missed the detail and narrative that added the depth to the book.

So bad that it might be worth a listen.

The book was horrible, but the many passionate love scenes are quite hillarious. I don't think Martin was actually trying to be funny when he wrote and read those scenes, but they really had me rolling. There is often an element of comic relief present when a man attempts to describe a woman's passion, but Martin's efforts are over the top. For you ladies who think that men must be stupid because they only think about one thing but yet still manage to not understand it at all, here's your proof. Listen to this book and go ahead and gloat.

Steve Martin's reading made the difference

to quote LA Story: "All I could think to myself was wonderful, wonderful, wonderful, wonderful, wonderful, wonderful, more wonderful, and yet again wonderful". Mr. Martin's somewhat deadpan delivery of this beautifully subtle work lets his character's words shine through so clearly. To call this a romantic comedy undermines the insights that Martin casts onto life and personal relationships, and ignores the fascinating darker side of this tale. His descriptions of male libido both young and old, female sexuality, and the way we interact with our universe really stick with me. I have listened to this book over and over again, and every time I get to the end, I want to start over and hear it again.

A beutiful story that is masterfuly told.

Wow! Steve Martin is a polished literary novelist. Who knew? The story is delightfully excruciating and impossible to put down. A modern day love story that has something to teach all of us about ourselves.